Things suddenly get real as our hero realizes that he has the ability to change time….. with a little bit of magical walkie talkie help ……..and all our leads have to start coloring outside the lines of the law to catch a killer in the past and the present.  It is an intense hour which this fangirl loved deeply and if at times I don’t know 100% what’s going on during the first viewing, then that is OK since our detectives are at a loss as well (and it gives me an excuse to watch it again and catch all the details I missed the first go around).  So come join me as I chat about all my favorite spine-tingling moments in Episode 3.

A Change In Events

That moment where Hae Young realizes that time just changed is purely awesomeness pickled in a jar.  The confusion, the expressions, the feeling that he is being punked.  Pretty much this photo says it all.

It is the perfect way to show the viewers that time can be changed, alhough he is still unaware that he and Jae Han are the ones changing the past events.  You have to wonder what our poor hero is feeling right about now.  Hae Young knows that the past used to be different, but everyone around him, including all media about the murders has changed.  #8 became an attempted murder and while the other three murders still occur, the locations of the deaths and the timing also change.

Which of course makes Jae Han wonder why they changed.  Why did the killer suddenly change his previous MO of killing in remote locations to killing women inside of town?  I also love that this alternate timeline gives Hae Young the ability to access more information.  In a way, Hae Young is looking at double the murders/clues since he now can study the original deaths and then also the new deaths.  What is different?  Why the sudden change?  And what does it mean that the number of deaths stayed the same and suddenly the serial killer disappeared?  I specifically liked how creepy the moment was when Hae Young and Soo Hyun discussed how the killer could still be nearby, just dormant. Gave the present story line that little extra oomph of suspense that was needed.

We also get to look deeper into the 1989 Jae Han’s life and how his actions are affecting future events.  I like the comparison we get between his and Hae Young’s experiences.  Hae Young has the ability to know all the information after the fact.  He can see the patterns and events with a bird’s eye view while Jae Han is actually living the events.  Not only living the events but being confused with some random dude speaking to him on the walkie talkie and giving up info only the killer should know.

It causes a lot of problems as Jae Han starts knowing events before they happen.  Especially when our hero of the past accidentally arrests the wrong person.  A valid mistake when you consider he was chasing the perp from the attempted murder and within seconds one man dressed in black disappeared and the false suspect was standing there, dressed all in black, where the real murderer should have been.

The scene where Hae Young warns Jae Han that the suspect was going to die in custody, as well as a new murder, was going to occur (all while the events were literally happening) was an especially well done moment.  It gave a great push towards proving that Hae Young is indeed from the future (not that Jae Han is ready to believe it) as well as showing the limitations of Hae Young.  It’s not like he can force Jae Han to act, even if he warns him that something is going to happen.  Also, I find it interesting that there are limitations depending on what time of the day the murders happen.  Hae Young can only contact his past counterpart at 11:23 which means that if things happen at the same time, that moment can’t be changed.  Which brings us to our next focus point.

The Bus of Death

I love the reason that is given for the sudden influx of murders within the city limits as well as how it affects both the past and present investigations.  Realizing that the killer must have jumped on the bus to evade capture, Jae Han demands an investigation.  At the same time (28 years later) Hae Young realizes that the logical reason for the increase of time between the last three killings could all be connected to the bus as well.  In fact, it is very likely that the last three victims were all riding the bus at the time the killer evaded Jae Han.

The only problem with this theory is the denial of the bus driver (in the past and again in the present) that anyone actually came onto the bus that night.  The past version of the bus assistant even confirms the drivers story, which paints a huge target on Jae Han’s back.  The police begin to question his reason for being in such a remote location at the right time. They even lock him up for further questioning and take away his badge and walkie talkie.  Somehow I think that saying the magical walkie talkie told me to, is not going to be a valid defense.

While Jae Han hangs out as a suspect (more like a fall guy for an embarrassed police department) Hae Young and Soo Hyun are hunting down the bus driver’s assistant, wanting to question her about the night of the almost murder.  They arrive at the assistant’s house only to find her murdered and the body tied up with a very specific and familiar knot.  WOOT!  Looks like we have a reemergence of the serial killer.  Or so it looks at first glance.  With more info coming in, we learn that while the knots are identical, the MO is slightly off.  Does this mean copy cat?  Regardless of who murdered the lady, it is certain that it is connected to the past killing spree since that complicated knot had never been released to the public.

I personally am a huge fan of this plot twist.  It makes me feel that there is more urgency for our modern day detectives to help solve the crime of the past and present.  When there are no consequences, it is just a tad bit less suspenseful.  Why should Jae Han have all the fun after all.

We actually get a very good scene between Hae Young and Soo Hyun in discussing consequences of messing with time (hypothetically).  Hae Young is concerned that by messing with time, the future will be completely screwed up.  Pretty much putting the butterfly effect in action.  Soo Hyun gives him a different point of view (of course coming from a person who doesn’t know that the past can indeed be changed thanks to a magical walkie talkie). Soo Hyun says that if she had that ability she would attempt to change her regrets about loved ones.  Of course, we the viewers, all know she is referencing Jae Han’s disappearance.  If she did nothing the regrets would be overwhelming so let the future worry about itself and just go for it.

This is advice that Hae Young takes to heart and makes him decide to act and damn the consequences.  With that in mind, Hae Young starts trying to contact Jae Han during that special time.  He tells our past detective (who is behind bars but still able to hear the walkie talkie) that two more murders are going to occur.  One is very soon and the next would be the following day to a woman named Kim Won Kyung who would die in the streets of her town at 9:30.

This sends Jae Han into a frantic tizzy since he happens to have a massive crush on Won Kyung. Jae Han had even given her a taser so she would be safer walking home.  Screaming for someone to let him out or give him a phone call, Jae Han is ignored.  He finally decides to go to drastic lengths when he fakes being ill and knocks out the guard.  Jae Han grabs the walkie talkie and runs away to save his lady love.

This show never lets up on the intensity and I love it for that.  When I am watching this I expect mystery, murder, and mayhem with a little bit of hot Lee Je Hoon being all detective-like.  And so far there has not been one complaint from this viewer.  Even the fact that I missed a bit of episode 3’s plot can be attributed to a bad headache and not because the director and writer have made things confusing. 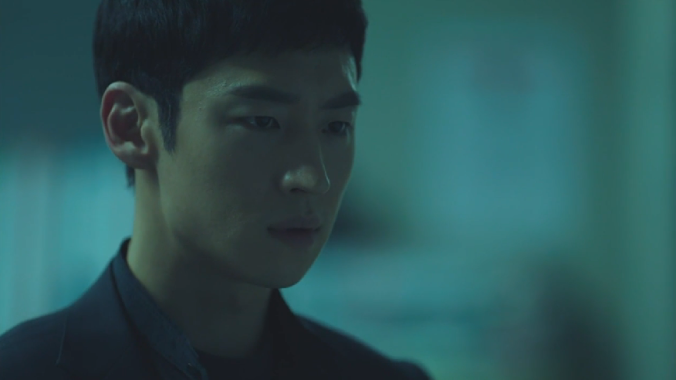 With each episode, I come away with so many questions.  Questions such as……… If Jae Han saves his first love, what does that mean for Soo Hyun?  Was I mistaken in thinking they were dating?  Or was theirs just a work relationship with some kind of deep secret?  Is the killer still alive?  Is the current killer a relation to the original killer?  How shady is the bus driver?  I personally am expecting the killer to be related to the man somehow.  And on another note, Who killed Jae Han in the future (2000) and can that also be stopped?  If it is a cop conspiracy, does it have anything to do with Hae young’s brother and his mysterious imprisonment/death?  So many questions and hopefully many answers yet to come.  I can’t wait to watch episode 4 and see what Drama Geek has to say about it.

0 thoughts on “Signal Episode 3 – A Plethora of Murders”