YAY! It is as if the writers listened to all my complaints and fixed them this episode.  Or at least, fixed them enough where I wasn’t constantly rolling my eyes the whole 60 minutes.  So…progress!  Now, if we can just get rid of annoying Hot Doc and hook up our OTP, life will be good.  Sadly, with a girl as dense as Mi Mo it might take some serious fate intervening to make her give up the sure thing for the right guy.

This scene could have been my top five in and of itself.   Talk about a truly awesome banter between Mi Mo and Soo Hyuk’s son, Min Woo.  The boy comes home to find his dad passed out on the floor and Mi Mo is straddling his lap.   Min Woo crosses his arms and states, “I think you need to give me an explanation.” Hahahaha.

Flustered, Mi Mo tries to shake Soo Hyuk awake going through all his names and finally even calls him Romeo all to no avail.  Soo Hyuk is down for the count.  It cracks me up that it is only when Min Woo comments that Mi Mo should maybe get off his dad that she realizes her risque position.  The hilarity is just compounded when Min Woo says that he heard when a man and women do that it is how babies are made.  Mi Mo tries to comfort him by saying that it takes more than that to have a baby.  Min Woo changes tactics and asks if neighbors can also be pickpockets.  Mi Mo huffily asked if a pickpocket would be dressed this classy from head to toe?  BWAHAHAHAHA! These two are just awesome.

Mi Mo helps drag Soo Hyuk to his bed and you can practically see the matchmaking light go on in Min Woo’s head.  Especially after Mi Mo goes out and buys everything he would need for dinner and for a hangover soup for his dad.  He even sends out some feelers by stating that he and his dad really need a woman in their lives.

Sadly, Mi Mo misses the point and the next day she offers Soo Hyuk her matchmaking services, since he obviously needs a wife and mother for his son.

#4 Protecting Mi Mo from the tabloids

The rumor that there was a love triangle going on between ex-boyfriend chef, his baby mama and an unknown girl is starting to make the rounds.  Soo Hyuk deflects suspicion by stating the scuffle was just some ahjumma who had food poisoning and nothing to do with the famous couple. 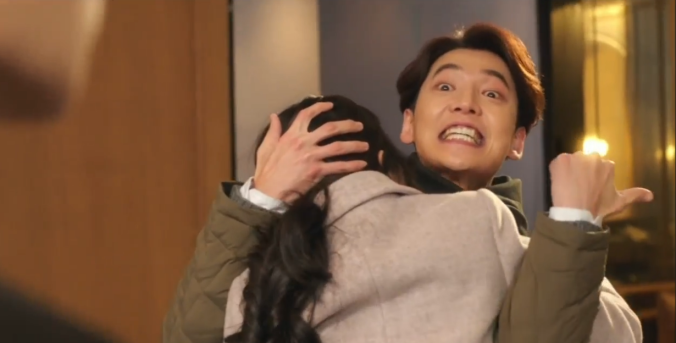 Which would have solved everything if one of the other tabloids wasn’t also on the hunt for the scoop.  Soo Hyuk promptly goes to the hotel to check on how gossipy the staff is and if Mi Mo needs to worry.  Just by fate, Mi Mo is there for Ae Ran’s wedding and she and the ex get in a fight.  Soo Hyuk saves her from exposure and gets all cute and aegyo as he walks Mi Mo to her car.  But cranky Mi Mo is not in the mood to be charmed and starts to tell Soo Hyuk off.  At which point Soo Hyuk starts to yell that she has to take care of him since she was the first to see his twig and berries (remember the depantsing in elementary school?).  The tables were turned when he realizes that he had yelled that right next to a bus of eavesdropping tourists.  Hahahaha.  Embarrassment thy name is Soo Hyuk 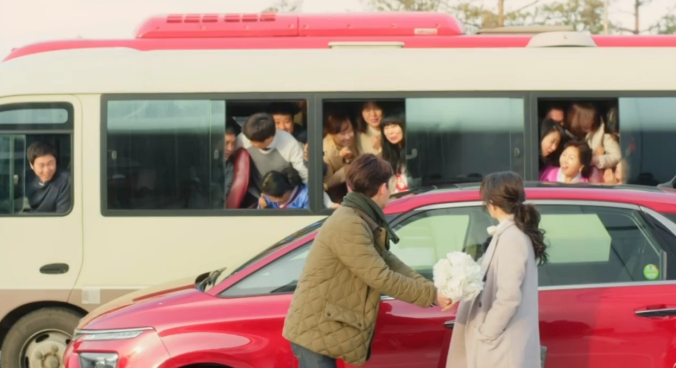 I have a feeling that this past love triangle is not going to stay secret for long.  Especially when Soo Hyuk’s rejected co-worker puts two and two together and gets bit by the jealousy bug.  I have not mentioned it before now, but I am not a fan of her.  A little too much of a pathetic stalker for my tastes.

I will be honest and admit that before now Ae Ran’s fiancee (and now husband) was pretty much a non-entity on my entertainment radar.  For this blogger, he was more boring than even Soo Hyuk’s stalker co-worker.  That all changed with one small wedding.

A wedding in which all his exes (from the last two months) arrive in black and a death lily in their hands.  Seems that hubby is quite the playboy and has literally just dumped all his girlfriends days before his wedding.  To say Ae Ran is furious is an understatement.

Lamps & vases were shattered, curses were screamed, and Ae Ran went on her honeymoon solo in true feminist fashion.  I am liking Ae Ran a lot more in this episode.  Although I might just be dazzled by her quirky sparkly sunglasses.

I am a bit sad that I suspect Ae Ran will eventually take the jerk back.  If it were me I would divorce him ASAP and chalk this up as the worst decision of my life.

#2 He is divorced and other things you did not know

There are a few things you should know about your boyfriend.  Just simple things really.  Like how he likes his coffee.  If he is a dog or cat man.  Oh yes, and if he is divorced or not.  Especially when you consider this is information a divorce matchmaker specialist would want to know about her potential soul mate.  To learn the news from his underage wannabe girlfriend is just wrong on so many levels.

I don’t understand why Hot Doc didn’t bring it up.  Obviously, Mi Mo is not overly picky about her boyfriends so this would never be something she would consider a deal breaker.  I can only assume it was because he is a selfish jerk who is playing some type of relationship game.

This assumption is supported when we see Hot Doc (who is not an idiot) play all innocent during a series of dates with Mi Mo.  A little bit of hand holding but no kissing or skinship beyond that.  I might have written it off if his ex-wife didn’t tell him straight out to stop with the games or he was going to lose his girlfriend.  UGH.  Suddenly he has gotten a lot less attractive and more conniving. 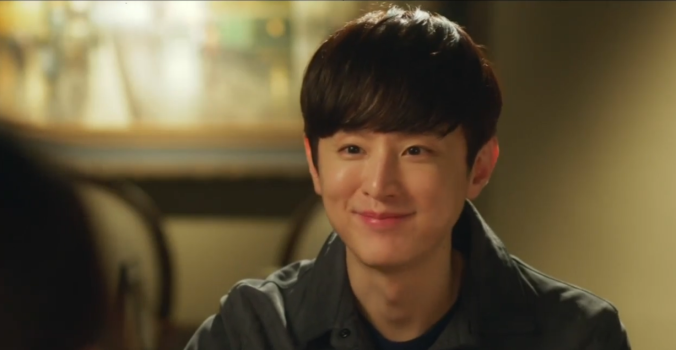 #1 Operation: Become a roadblock in their relationship.

The new smarmy Hot Doc actually helps me enjoy this scene.  Usually, I would cry foul since Mi Mo’s boyfriend is his best friend.  But since I really don’t like the BFF I was able to really enjoy Soo Hyuk having an emotional breakdown and doing everything in his power to block Mi Mo’s hot date night.

Soo Hyuk calls, he whines, he shows up in the middle of the date with chicken and beer.  It was just perfectly hilarious. 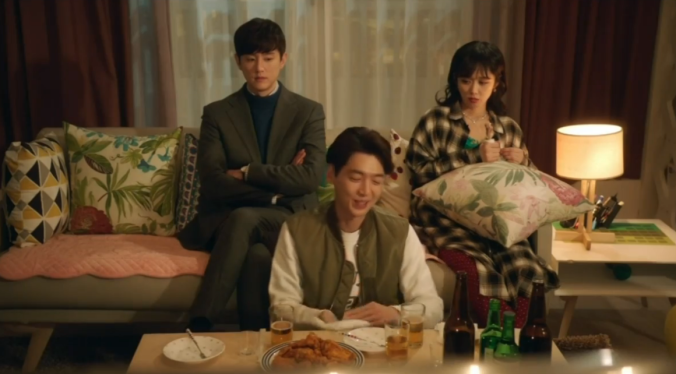 I won’t go into detail but how awesome was Soo Hyuk with the baby.  Soo Hyuk being turned on by Mi Mo’s magic trick.   And of course, Soo Hyuk taking care of an ill Mi Mo.  If this girl doesn’t wise up and jump him ASAP I don’t know what I will do.  Maybe draw mustaches on all her screencaps.  She has been warned.