So many strong emotions are drifting around in this episode and becoming a pillar between everyone’s love stands one selfish Not Hot Doc who is clinging onto his one sided love with the grip of a leach.  OK, so I might be a bit biased (still) but who wouldn’t be when two people obviously belong with each other?Luckily we do get some inroad on all sides as we journey to eventual happiness. So join me as I discuss my five moments of Episode 7.

We finally see the flashback of Soo Hyuk and his first love (Min Woo’s mother).  And surprisingly Not Hot Doc’s unrequited love for his BFF’s girlfriend.  OUCH.  I guess it does suck a bit that history is repeating itself. 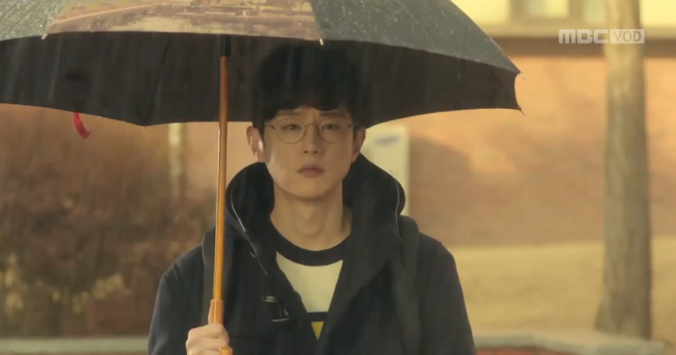 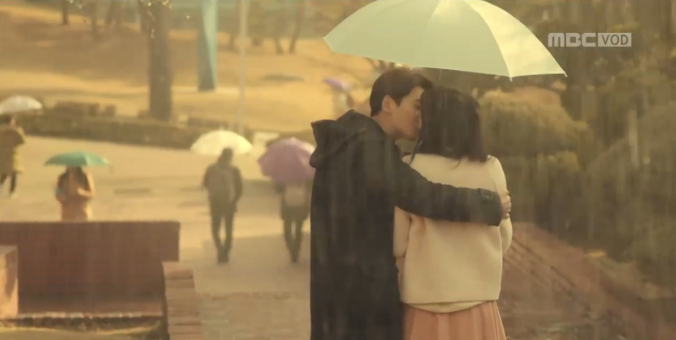 We also get a glimpse of the trauma of Soo Hyuk’s past and the guilt he feels for the death of his girlfriend.  We also get the impression that maybe Not Hot Doc also blames him for her death (just a tiny bit) but stands beside him in the aftermath.  Something impressive on a friend level, I will give him that. 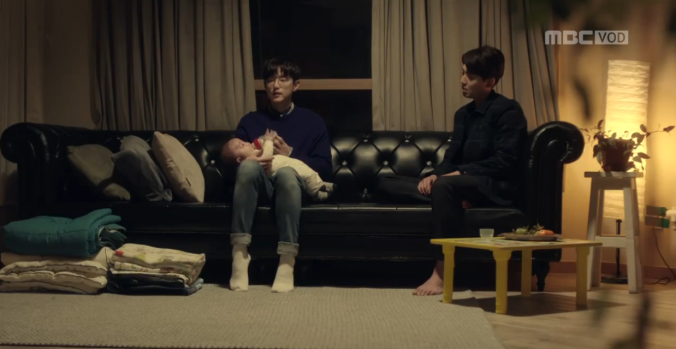 However, his actions in the present are not as friendly.  Not Hot Doc pretty much tells Soo Hyuk to just sit in silence and deal with his one-sided love like a decent person would.  It’s his duty to do it that way (you know, since that is what Not Hot Doc did) which puts a huge dent in Soo Hyuk’s confidence.  After seeing the flashback, you can tell that some of Not Hot Doc’s dialogue was a direct hit to Soo Hyuk’s past relationship failure.

Watching in the hallway is Ex-Not Hot Doc who does her best to comfort a devastated Soo Hyuk and point out logically that he shouldn’t assume his love is one sided.

FINALLY, a kdrama character says that the woman has a choice as well and that you don’t know if it is a one-sided love until you know the contents of the woman’s heart.  Well said Ex-Not Hot Doc.  I applaud you for your intelligence and EQ. 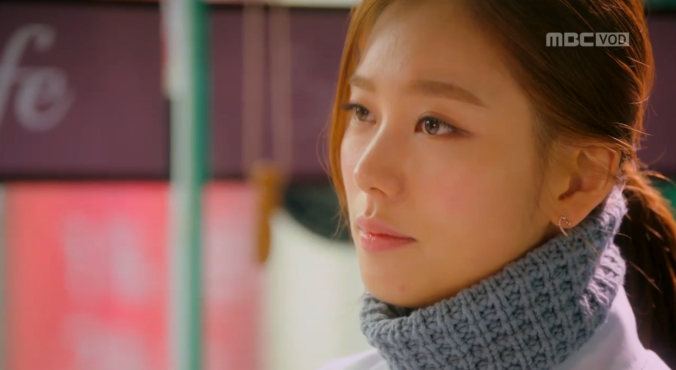 Enraged that Mi Mo might escape his clutches……. I mean she might like someone else other than himself, Not Hot Doc gets a little testy when Mi Mo talks about Soo Hyuk.  Not Hot Doc even goes far as to finally kiss Mi Mo to shut her up, “I don’t want these lips to talk about any other man than me.”

Let’s just agree now that Not Hot Doc is a total tool.  If a guy starts telling you that you are not allowed to talk or think about anything but him………. kick him to the curb.  It means he is a controlling jerk who is screwing over his best friend because he has hidden jealousies over a past love.

These two are killing me.  It is bad enough when there is a couple with no love involved who break up.  It is even worse when you know that it is a couple that truly love each other but due to pride and an inability to say what they are feeling, they break apart.  And never is there a better example than these two.

I appreciated the look back to when Da Jeong and her husband fell in love.  Also the husband’s small effort to open a door of dialogue in the present.  Only to have it slammed shut by Da Jeong handing over the divorce papers.  UGH.  And when Da Jeong really needs her husband the most now that she is facing cancer.

#3 Our Hero Has A Fatal Flaw

While most fatal flaws are annoying, Soo Hyuk’s just makes me say “awwwww”.  Especially now that we see how insecure Soo Hyuk is about making mistakes and being worthy of a girl.  In the past, Soo Hyuk had extreme concerns about being good enough and ready to raise a child.  Now he is just as scared to make a woman live with a single father who was previously emotionally unavailable due to guilt. 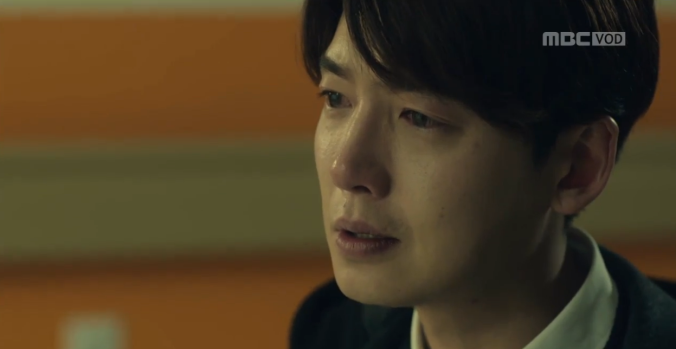 It doesn’t help that Soo Hyuk’s best friend is playing on those very insecurities to keep him away from Mi Mo.  Just when you think you can’t dislike Not Hot Doc anymore than you did.

On an up note, it gives us plenty of opportunities to see Soo Hyuk being angsty.  Something that is always a positive since he is such a talented actor.  Not to mention, I am loving the emotional growth of his character.  Out of everyone, Soo Hyuk is having to find the most courage to not only admit his feelings but to also find the strength to overcome his flaw and act on them.  Kudos to you Soo Hyuk for being the best type of flawed character.  One we can root for.

#2 Soo Hyuk’s Love for His Son

Tears literally welled up in my eyes as I watched Soo Hyuk hug Min Woo.  An amazing example of a single parent and the love he has for his child.

#1 YES YOU LOVE HIM!!!  Now dump Not Hot Doc to the curb and grab that man and his sexy hands ASAP.  Not to mention do you really want to hook him up with other woman?  No!  Listen to that flittering heart of yours and GO GO GO!

OK, I might be a bit enthusiastic (and ahead of myself) about our OTP finally hooking up…………… just a little…………all right, I am scarily invested in their relationship and if I am not careful I will start dreaming about it and then where will I be when I yell out “Kiss him already” in my sleep and my husband starts to worry about my sanity and bans Kdramas from the house all because these two would not just fall in love already…………Whew…..Rambling over.

Mi Mo has started to become a bit obsessed with Soo Hyuk and his possible dating.  And when Soo Hyuk finally agrees to have Mi Mo set him up with someone, all she can do is stare at him.  But leave it to Mi Mo to be oblivious when he gives her own exact details as his ideal type.  SIGH.

Sadly, we are not at the point where Mi Mo realizes that her emotions have officially shifted, although Not Hot Doc sure has noticed.  When Mi Mo continues to only talk about Soo Hyuk’s upcoming date (she hooked him up with his supposed ideal type) he finally throws a fit and tells Mi Mo that she is being selfish and inconsiderate.  Not only that but it comes out that his first kiss was really just to shut her up.  OH, MY WORD JUST DUMP HIM ALREADY.

But no.  After storming out, Mi Mo goes off to apologize to Not Hot Doc.  Only to find him with his ex who is kinda sorta confessing her lingering feelings.  UGH.  No, do not get jealous over that louse.  Take this opportunity to call it good and follow your heart, or your hand as the case might be. 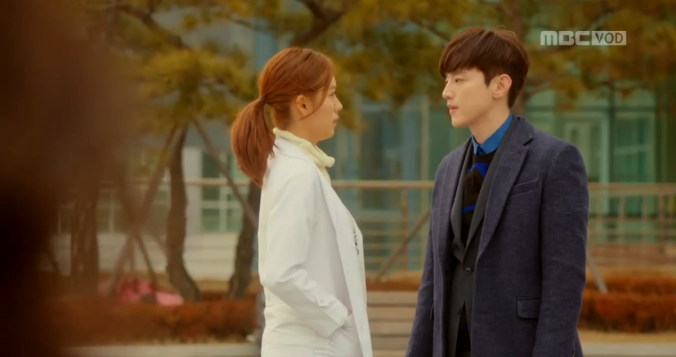