I am not sure if I am excited or dismayed that we are finally getting to the final cold cases that need to be solved.  Sure I am thrilled to finally get to the meat and potatoes of the plot.  But that also means that we are getting closer to the end which will leave me devastated.  It is always hell saying goodbye to a truly well-done drama.  But time waits for no one and we must move on with yet another great episode.  So join me as we finally get to delve into Hae Young’s tragic backstory.

I can’t be the only one who expected Soo Hyun to run straight into the arms of the Clerk Killer?  But once again this show twists my expectations and it is Hae Young who encounters Soo Hyun in the killers home.  A Soo Hyun who had entered the killer’s home………alone……….with no black up………in the middle of a panic attack.  This is officially the first time where I felt like the present Soo Hyun got hit with the stupid stick. 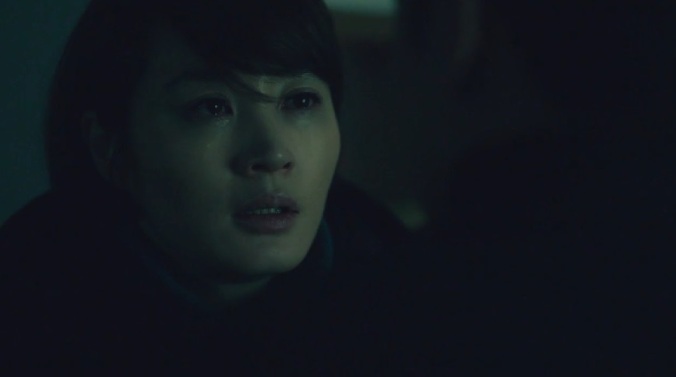 It’s a good thing that it was just Hae Young because Soo Hyun officially freaked out when she was confronted.  Not even realizing that it was her partner and not the killer in the room with her.  So the house and the Killer Clerk’s workplace were being thoroughly investigated but no sign of Killer Clerk.  Where could  a psycho killer possibly go?  To his burial grounds of course.  We see Killer Clerk lugging a large suitcase up towards the mountain in a car camera and the hunt is on.

As the cops comb the mountain, we see Killer Clerk preparing once again to kill someone, only, this time, it is himself.  He ties a black bag over his head and steps on a log to the noose hanging above.  Just as Killer Clerk knocks away the log we hear gun shots.  It is Soo Hyun who shoots the rope, saving the killers life.  She presses her gun against the perps head and whispers that she is going to help him.  There is no way he is leaving this world so easily.

Sympathy for a Killer

If you had told me that I would somehow be sympathizing with a serial killer on a kdrama, I would have called you crazy.  Dude, he goes around and smothers girls, burying their bodies on deserted mountains.  That is plain creepy with a capital C.

But sympathize, I do.  That goes to show how a powerful actor and a good director can really make a small character shine.  I am enjoying this performance so much I am tempted to go check out Bluebird House just to watch more of Lee Sang Yeob.  But I digress, back to my unhealthy feelz for our murderous hottie.

Turns out that our Killer Clerk was tormented by emotions he felt for his last victim.  Remember the girl that had a thing for him? He obviously felt the same even though Killer Clerk had no clue what these new feelings were.  Well, we all knew that Killer Clerk was going to kill the girl when she followed him to his abode.  But instead of the cold killer we know Killer Clerk to be, this time, he was tormented emotionally as he killed her.  He was so broken up that he had not been able to kill anyone since that day and decides to end his own life.  Killer Clerk’s expression as he held his victim (and choked her) was just so oddly tormented that I 100% felt empathy for the psycho.

So did Hae Young who later commented that if only one person had focused on the man’s pain and situation then maybe things would have turned out very differently.  The way Hae Young wistfully made that statement makes me think that he was possibly thinking of his brother.  Or maybe even his childhood self, back when no one heard his pleas.

I was impressed that Hae Young stuck by his vow not to tell Jae Han how to find the killer, fearing present repercussions.  Remember that every other time they tried the time changing thing, other people had died as a result.  This time, Hae Young is taking no chances.  But even the smallest hint is enough to send Jae Han in new investigative directions (directions that he hadn’t taken in the original timeline).

For example, as a result of Hae Young’s previous conversation regarding Soo Hyun’s need for emotional support, the gruff cop had gone to see her.  Resulting in Soo Hyun’s return to the investigation early.  Between the two of them, they realize that the dead body in the closet was real.  From that Jae Han hunts down the Killer Clerk in the past through his mother and arrests Killer Clerk.  This saves 9 more women from dying and Killer Clerk is institutionalized in a mental ward where he belongs.

There was one last disturbing scene in the saga of Killer Clerk.  As Hae Young is leaving the psych ward a bunch of female workers go walking past.  Among them is the girl Killer Clerk had fallen in love with.  As she walks past, we see Killer Clerk take note of his past victim. Even institutionalized in a crazy house this guy is creepy as heck. 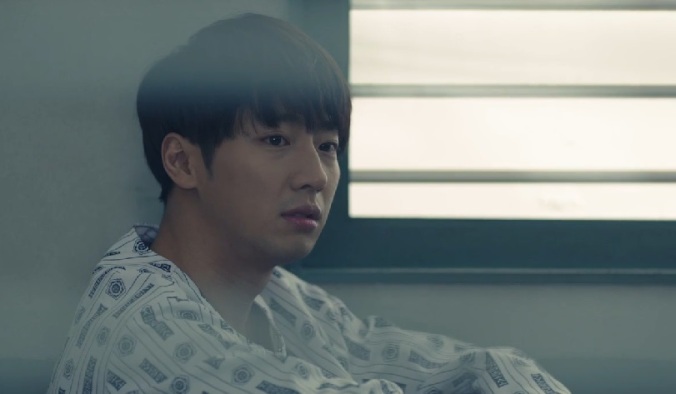 I love these little breaks from intensity as we see past Soo Hyun interacting with her crush Jae Han.  It is adorable how the whole precinct knows except for Jae Han.  That man is oblivious.  Twitterpated Soo Hyun just makes me smile so much.

If I tell you the truth will you believe me?

In the present Soo Hyun smiles at her memories of Jae Han until her memory bubble is popped by her suspicions about Hae Young.  Both of the two cops had arrived at the medical examiner’s office when they heard another unidentified body had been found.

It is not Jae Han, but the medical examiner (and Soo Hyun) find it odd that Hae Young seems to be as emotionally invested in someone he doesn’t know.  Soo Hyun again tries to corner Hae Young for answers but her partner just looks at her and wonders if he told her the truth would she even believe him?  Once again Hae Young walks away leaving Soo Hyun confused behind him. 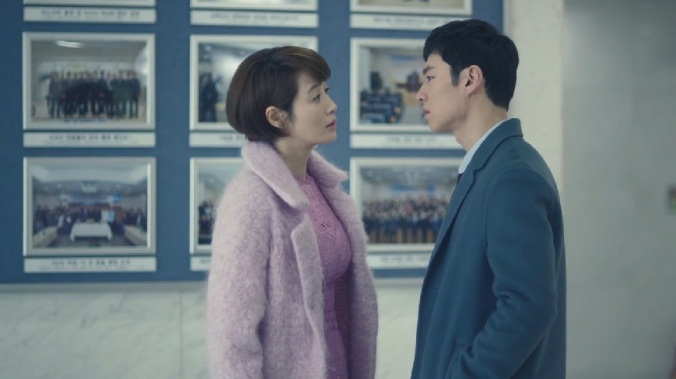 My Boss Is A Suck-up

Bum Joo is up to his old tricks as he agrees to investigate the rape case quickly and publicly take down those responsible.  Of course, we all know that somewhere in that spiel he is agreeing to cover up some type of crime and throw others under the bus.  Classic Bum Joo. 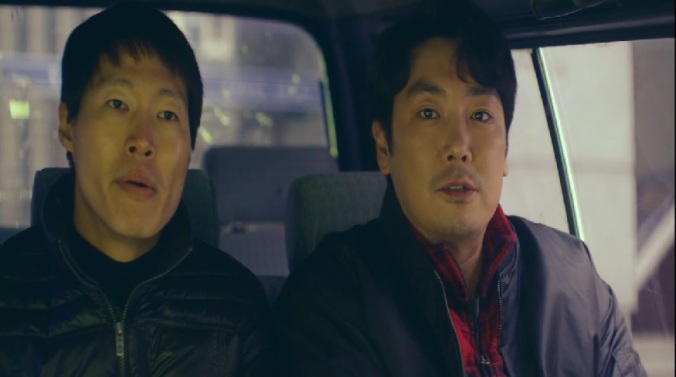 So begins the Injoo Rape Case.  A bunch of boys gang rapes a high school girl and through the power of the internet, an anonymous source outs the crime on the school web page.  The girl is devastated and tries to commit suicide but fails.  Since it was so publicly announced the police are desperate to get the situation under control. I am also taking a wild guess that Bum Joo’s benefactor has kids involved in the rape…….. but that is still speculation.  Bum Joo and his hand-picked team (Jae Han sneaks in) are borrowed from the local precinct for extra help.  Bum Joo takes over and informs the local chief that he and his team will catch the culprits.  Suggesting, “This trash are ruining your city’s image.  Let’s take care of them publicly”

Originally there were only 7 people accused of the rape (and they had not been named specifically.)  This later changed when the number significantly increased to 18.  Of course, this wasn’t specifically from the lips of the poor girl raped, but from a paper, her father wrote out and supposedly had her sign. WOW.  Way to really look deep into the actual truth of the matter. It completely boggles my mind how people will automatically take a rumor at face value. Everyone seems totally on board with the “make the scum of the city school system suffer” plan.  Everyone but Jae Han who is not convinced.  Of course it helps that Jae Han has the future Hae Young telling him that something does not add up.

Things seem to line up perfectly with eyewitnesses and names coming easy, although everything was circumstantial.  I am taking a wild guess that it was Hae Young’s brother who was the whistle-blower on the rape.  He also delivers a picture of seven student council members who were at a retreat.  I am taking a wild guess that these are the actual delinquents that raped the girl and everyone else is just being set up to take the fall.

Switch to the present where Cheif Ahn’s daughter is dying in the hospital.  Looks like we suddenly have insight as to why Chief Ahn is Bum Joo’s lackey.  It also looks like Bum Joo realizes that he might be losing control of Chief Ahn and starts threatening him with dire consequences if he doesn’t toe the line.  He also finds out that Hae Young is the brother of that kid who died in Injoo.  Hmmm makes you wonder if he actually had help committing his supposed suicide. 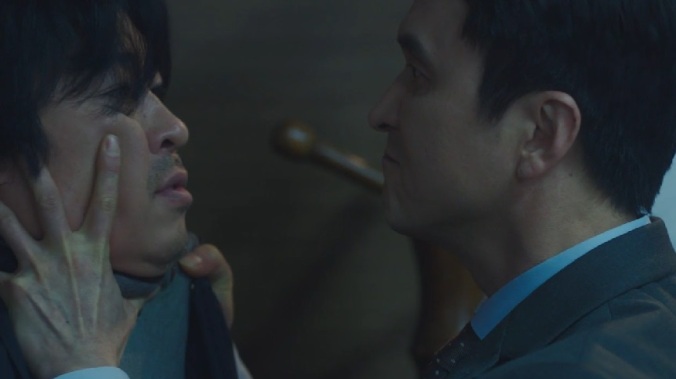 Rather than bow down to his psycho killer boss, Chief Ahn hands in his resignation and says he knows that he is just as dirty.  Hmmm looks like he is going to stay silent, but is done helping Bum Joo be a crazy evil, on the take, boss.

Or not.  The first thing Chief Ahn does after throwing off his evil shackles is call Hae Young and say he has info about Hae Young’s brother.  But to be sure he wants to know because it might cost him his life.  Hae Young confirms that he must know or die trying so Chief Ahn tells him to come to the hospital in Injoo. What? No! Tell him now. Everyone knows that if you let there be time in between suggestive secrets and actually telling said secrets, that you are going to die a horrible death by the bad guys before you can utter the secrets.  This is crime show 101.

This time, there is no surprise twist to change the usual crime drama trope and Hae Young arrives just in time to see Chief Ahn fall down after being stabbed. See, I’m telling you, just spit out important information when you have the chance.  Otherwise, you will die with all your secrets intact.

Be sure to check back for Drama Geek’s review of episode 12.  I am sure that it will be as action packed as this episode was and maybe we will get more answers.  Is it too much to ask that we get a Jae Han and young Hae Young scene?  It could happen, right?