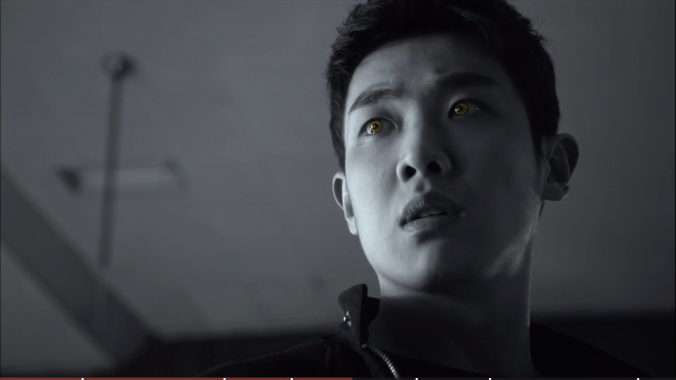 Yay, another supernatural cop drama to recap. I swear the next drama I do is going to be a rom-com. Until then, let’s get oh so down and sexy with the latest addition to the vamp world. Though, I’m not sure our resident vamp actually knows he is one.

As Kmuse stated in her recap we’re going to highlight our top 6 moments of each episode. And today’s is going to be a checklist on how to tell you’re a vamp. Because I guess it isn’t always that easy to discover.

You’re shot a few times and the bullet wounds disappear. Oh, and so does the scar from the one your dead love gave you. San’s back on the treadmill after Gyeo-wool’s brother and his girlfriend both disintegrated into ash. Except he isn’t having a hard time pushing that sucker up to higher speeds. And he doesn’t have any wounds left over from the altercation. His BFF isn’t acting like it’s strange so why should he? Gyeo Wool says goodbye to her brother, and promptly moves in with our boys. I’m going to love the cohabitation with these three. I think Goo Hyung’s face says exactly how he feels about this situation. Seeing and smelling blood gives you visions. Okay, so I feel like Vampire Prosecutor dude needs to send a protest letter. **SPOILER WARNING IF YOU HAVEN’T SEEN THAT SHOW** San doesn’t have to drink the victims blood to see how they died? It must be because of his altered vamp blood. I’m curious what else is different about San. Though I do think that this series is supposed to be it’s own entity and doesn’t necessarily follow the same vamp rules. So from here on out I’ll treat them as such. I just had to throw out that observation.

Our case of the week shows up and she’s a news anchor who’s been given a ransom letter of sorts. She sees a body in a locker while she’s prepping for her show, but when she gets back with the security guard the body’s gone. There’s a letter stating she has 24 hours to give them “that thing” or she’ll see the body during her next broadcast. The body turns out to be an announcer at the same station named Park Bo Eun.

Throughout the episode San comes into contact with blood, first on the bottom of the locker where the dead body was located. His eyes turn golden and he “sees” her in the locker. Can we take a moment to appreciate Lee Joon’s ears? I don’t think I’ve noticed them before this show. I think it’s because of all the saturated shots they’re doing to create the vamping out effect. I love me to some distinct ears. 🙂

Speaking of ears, while he’s vamping out he hears someone outside the door. I’m pretty sure he heard the guy’s heart beating. Which is another sign of vampireism but I’m going to group it in here. San tares off running but gets hit over the head and he passes out.

He has a little flashback of him and Killer Girlfriend before they went under cover. It’s sweet and all, and I’m sure by the end of the drama we’ll find out she didn’t want to kill him or something like that, but I still don’t like this character. Pretty much we learn from the flashback that San’s the kind of person that will never give up on something. I’m pretty sure the show means Killer Girlfriend.

When San’s wakes up he has a note stating they have 18 hours left to give them “that thing.”

Girl’s swoon over you and spill all of their secrets. Well… Lee Joon doesn’t have to be a vampire for this to happen, and I’m not sure he actually employs any of his super powers, but the girl sure does seem to be under his spell.

Both San and Goo Hyung feel like the lady that hired them isn’t telling them everything so San cozies up to an assistant girl in the studio, and is able to find out their client, Seung Hee and the dead girl were rivals. Rumors were flying around that Seung Hee landed her morning broadcaster spot through “connections”. Meaning she slept her way to the top. She also tells San that Seung Hee used to date an cameraman who recently committed suicide. And ever with their past relationship, she didn’t go to his funeral. Instead she did her regular morning broadcast.

You’re a total bad ass when you fight. On the other hand, it’s not exclusive to vampires because Gyeo Wool might look even more bad ass when she’s fighting gangsters.

Our trio decide to talk to a gangster to find out more about our dead girl. Turns out Bo Eun was one of their biggest clients and the boss dude ripped up her contract (I’m sure she pretty much sold her soul with the way she’s crying when she signs it.) and makes her do something for him. Which from what I gather she thought was getting info on Seung Hee, but ended up being becoming a dead body in a locker.

Having blood that has never existed on this planet. Yeah… that might be a pretty big sign except when their doctor/tattoo artist friend tells Goo Hyung this bit of information he doesn’t pass it along. 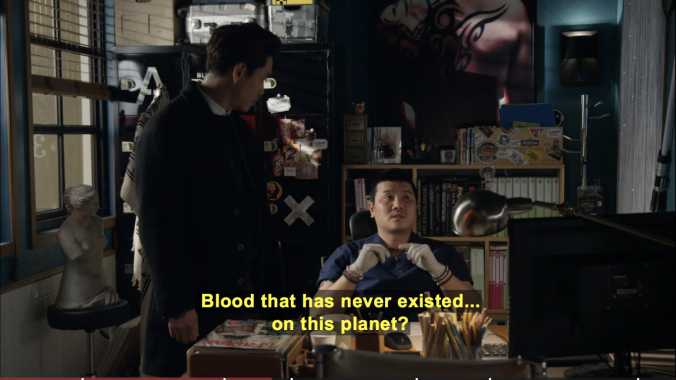 From here we find out the breakdown of why Seung Hee is being blackmailed. Which will lead to the final way San should have guessed he was a vamp. I apologize for skimming over the case of the week, but I think it was mostly set up for things to come. Anyway, the cameraman that Seung Hee dated dabbled in blackmail himself before he committed suicide. He had tapes of that creepy guy with glasses above being, well, creepy. Creepy Glasses Guy runs a social welfare organization and homeless people had been going missing. 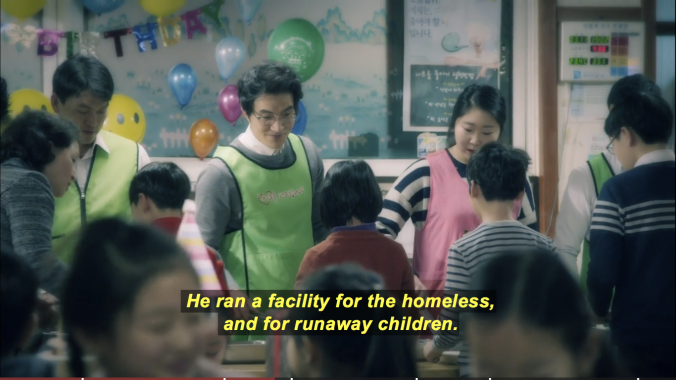 Cameraman had proof of what was happening to them. But instead of breaking it on the news like Seung Hee wanted to do, he wanted to blackmail Creepy Glasses Guy so they could live the life they always wanted. Seung Hee broke up with him, and then ended up marrying a wealthy man.

Our genius private eyes decide that they’re going to have our sexy vamp pose as a homeless person to catch the bad guys. Um… where in the known universe does Lee Joon look homeless? They didn’t even dirty him up.

But it works and he gets loaded into an ambulance. I cringe at this sight because I’ve watched enough Kdramas to know that homeless people are great for harvesting organs. And that’s exactly what our bad guys are doing. San is only pretending to be drunk, so when they go to pump him full of some solution he knocks one of them down and chases after the other. 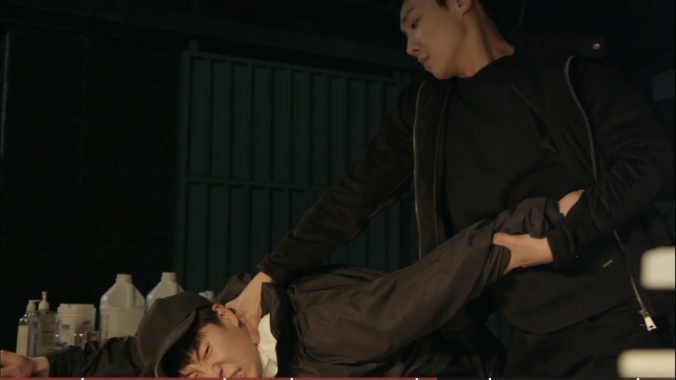 You can jump over a car, land on the hood and look like a boss when you’re done. Oh, and get stabbed about ten times and wake up without a scratch on you.

So San chases after the guy and ends up in between two cars. He runs toward one, then turns around and runs toward the other. They both drive at him (because he created some kind of force field so they couldn’t see that the other car was racing straight for them). He jumps over the car and they smash into each other.

Once he finishes looking total boss. Creepy Glasses Guy comes walking up with the minions he just picked up around the corner. Seriously, do these gangster dudes always have like twenty guys flanking them everywhere they go?

The battle that ensues is pretty one sided. Meaning San kicks the snot out of everyone, even after he’s been stabbed a thousand times.

Goo Hyung shows up right as San’s is in full on vamp mode about to kill Creepy Glasses.

Goo Hyung stops him before he does it, and Sans finally passes out from being stabbed and hit by a bunch of two-by-fours. I HAD to add the image below. I bet actors hate seeing themselves in situations like this. Is that confusion? Constipation? I’d wager both. 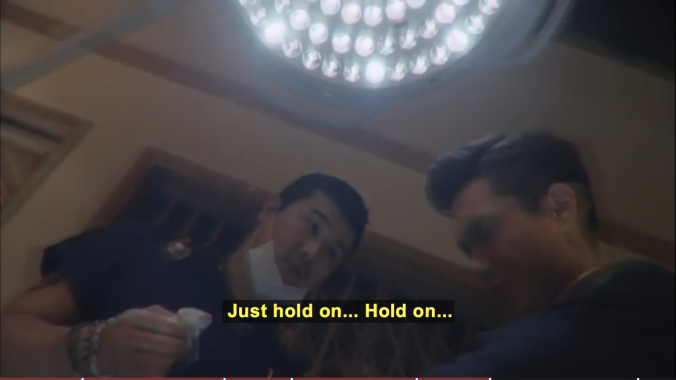 WAIT! WHAT? Most good vamps drink their blood from something. Some might even make it all fancy and put it in a wine glass. Our guy gets an inhaler?

Anyway, when San’s wakes up, he is of course wound free. They never show them actually discussing the fact that he’s a vampire, but they elude to it.

San’s rewatches the blackmail footage and finds out that the woman with the necklace appears in it. Meaning Creepy Glasses Guy probably worked for her, and organs might have been a secondary thing they were harvesting. Blood being the main one.

This drama is still finding it’s footing. At least in my opinion. The cases aren’t as suspenseful as I would like, or engaging. Which is key to a good crime drama. Again, in my opinion.

I love our trio. Gyeo Wool is tough, spunky and really is helpful to our guys. She’s determined to figure out what happened to her brother. Remember, so far our characters live in a world that vampires don’t exist so spontaneous combustion would be a more likely explanation than vampire. I like that about this show. We don’t start with everything figured out. San’s is just trucking along, ignoring these changes to his body. But now he’s going to have to face them. And he has his best bud by his side. I’m pretty sure Goo Hyung might want to bury his head in the sand for a while. But he has the makings of being a tried and true vamp sidekick for life.

It’ll be fun to discover all the rules of this world, right along side them. I do hope our resident Evil Vamp doesn’t stay in the shadows for too much longer. I enjoyed Lee Chung Ah in Flower Boy Ramyun Shop and I hope to see her being really kick ass in this series. She can’t really do that if she’s always in the dark.

0 thoughts on “Vampire Detective -Episode 2: How do you know you’re a Vamp?”