I am going to break from my traditional review and focus only on the scenes that involve our newest character, Do Shin Yeong (Jo Bo Ah).  I have to admit that this girl is cracking me up.  A breath of fresh air among the secret spy and company politics that we have been watching.

Let’s chat Do Shin Yeong. The daughter of Dodo Group CEO and over the top entitled brattling.

We first meet Shin Yeong at the end of episode 8 where Ki Tan is charged with collecting her from the airport and transporting her to a hair appointment at a top spa.  Shin Yeong throws a hissy fit but Ki Tan literally manhandles her into the spa and forces her to get her hair done.

It is at this point Shin Yeong has her first run in with Yoo Seon.  The latter was also at the spa for some reason and wanders into the VVIP room that contained Shin Yeong’s clothing.  When a bratty Shin Yeong tried to boss Yoo Seon around, things went south pretty fast.  Shin Yeong slaps Yoo Seon and in return gets a much-deserved set down and a lot of hair pulled out by our spunky leading lady. 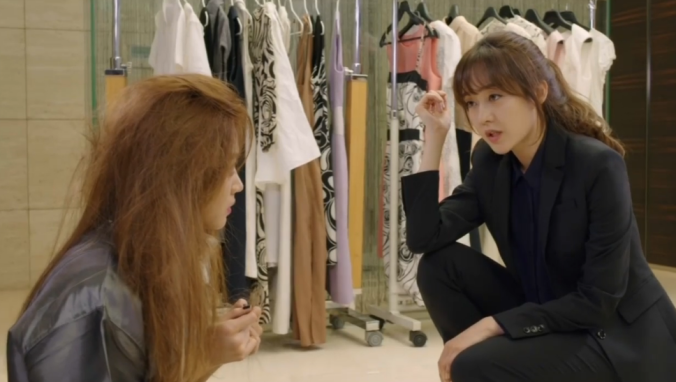 Shin Yeong demands that Ki Tan find the female thug that attacked her.  Ki Tan had already rushed Yoo Seon out of the spa upon realizing what had happened and lies to Shin Yeong that there were no clues to the identify the assailant.

Shin Yeong gets her revenge on Ki Tan when they arrive at her house and she declares that she and Ki Tan have been having an affair.  The announcement was made in front of Shin Yeong’s parents and the boy they had brought to lunch as a prospective son-in-law.  Thankfully Ki Tan was savvy enough to get Shin Yeong to admit to her facade in front of the parents.  I am appreciating that Shin Yeong has some brains and isn’t just all spoiled princess.

Our final Shin Yeong moment comes at the very end.  Everyone at Dodo Company is abuzz with the news that the president’s daughter is the new department head.  Which means bad things for poor Ki Tan and Yoo Seon.  They are instantly caught by Shin Yeong for their deceit at the spa and dragged up to her office.  EEK!  What is going to happen?  Are they going to be creatively punished?  We already know that they won’t be fired so it will be interesting to see how Shin Yeong makes their lives hell.  Is it too soon to hope that she and Yoo Seon become frenemies at some point?

In case you are wondering what is going on with everyone else…. Here is a quick rundown.  Double Agent Secretary (need to find a new nickname for her since it doesn’t really apply as much now) pretends not to know Yoo Seon.  My guess is because she is starting to love Ki Tan.

Yoo Seon needs money and is begging Ki Tan to lend her some.  Gun Woo is willing to give Yoo Seon money since he is starting to get a bit of a crush but is rejected.  Dodo group politics continue with everyone finagling behind the scenes.  Stupid hospital scenes happened with sick people being over the top sick.  Hopefully, we will have less sick people next week because they really bugged me.  Not because they are sick, but because of all the weeping and wailing and tantrums.  Could happily go the rest of the series without seeing this trope.