The ethical strength of our giant tax teddy bear Seong Il comes into focus this episode as he is forced to make a decision on what is truly important. Sadly choosing the road less traveled in Korean politics is never easy, so it is lucky there is a plucky ethically challenged Jeong Do to help him along the way.

I am so excited that we got more Jeong Do this episode!  Especially since he has more of a backstory than just your basic conman.  And before you ask, yes I was in full fangirl mode the whole hour.  Who wouldn’t be when this is on your screen? 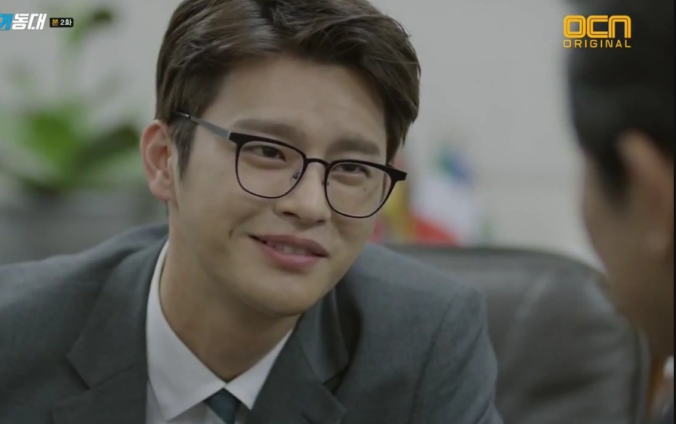 But since this is a recap (and not a Seo In Guk lovefest) lets chat about the plot and let out all our screams here.

Jeong Do’s backstory seemed so simple when he was describing his life in episode 1.  But within the first five minutes, we learn that he has a complicated relationship with his father (who is also in prison) and a connection with a chief detective.  I kind of laughed as Jeong Do was getting a lecture on staying on the straight and narrow while the cop was in the middle of a sting operation.  Great job of putting some added emphasis to get the point across.

It made Jeong Do nervous enough to set up a series of getaway cars in case things go bad.

Things have not improved for Seong Il since getting scammed.  Seong Il goes to work with the internal affairs investigation still pending in regards to his outburst against Bankrupt Baddy.  With the added embarrassment of being conned, Seong Il is in a pretty huge mopefest.

Things don’t improve when a past co-worker (turned private loan exec) shows up to give him some advice.  His solution, tax 6000 poor people for small amounts to reach his work goal.  Why go after the big fish when there are so many worker ants out there to take advantage of?

His ex-coworker leads him into a private room for lunch and who should they happen to meet, but a smirking Bankrupt Baddy who is all ready to bribe Seong Il with a car.  Seong Il straight up tells him to stuff the car keys.  OK, that might have been my inner dialogue upon having to gaze at his smirky stupid face, but the offer was rejected.  Seong Il even took a moment to reprimand his ex-coworker for his bad decision making in regards to Bankrupt Baddy. 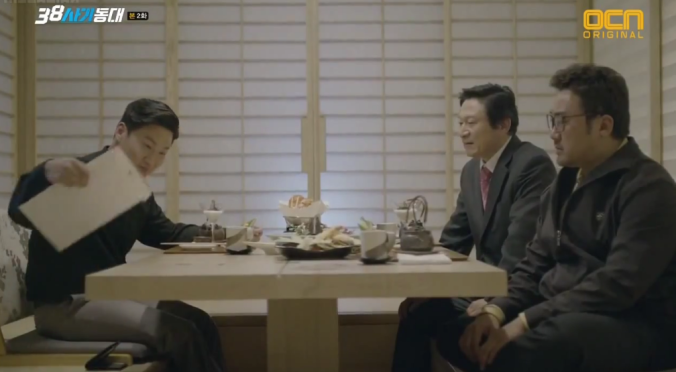 It is at this point that I really start to question whether Jeong Do made a mistake in thinking that Seong Il is on the take.  I am pretty sure he is as straight as they come…. at least when it comes to taking bribes.  Using a conman to take down evil bad guys….that is another story. 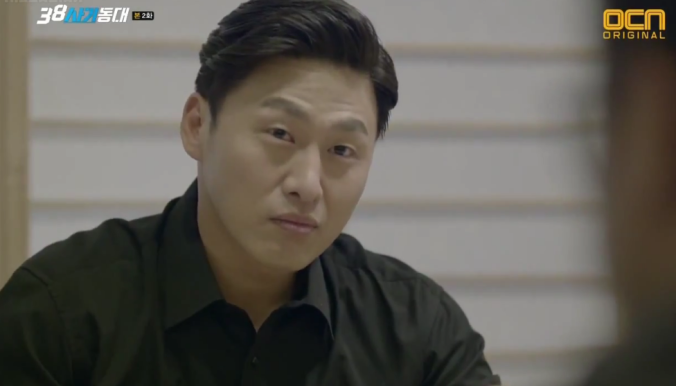 I am going to combine all of the periods of searching Jeong Do’s real identity into a few moments that stood out to me.  All of it was wonderfully done, but since it is getting late and I want to try to get this out tonight, I will condense.

I love that before being a cop, Deok Bae seems to be a friend first.  Not only does he help Seong Il hunt down Jeong Do but he also hands the con artist over when Seong Il asks.  I am hoping that he ends up being part of the con team in upcoming episodes.

I about died laughing when Deok Bae called him the holiday mother-in-law.  Nice in public but crazy when pushed too far.  We see this when Seong Il freaks out a group of hardened thugs by just taking off his glasses and threatening to chuck the furniture.  I love that Seong Il has a history of being a little unhinged.  Even if it was all in the past before his job took away all his oomph.

I could not have been happier to see Park Sung Woong (Remember) & Kim Sung Oh (Warm and Cozy) show up as low-level thugs.  It was even funnier when they ended up being inept thugs as Seong Il and Deok Bae whip them easily.

I can’t be the only one hoping that these two team up for a full drama someday?  Until then I guess I will just have to be satisfied with this tiny glimpse of the bad boy bromance that could have been.

#4 A car chase that didn’t look like it was just a car product placement.

My kfriend Z actually pointed out that for once the car chase didn’t look like an overly long commercial for an automobile.  It was a fun chase scene in which we were able to see how clever Jeong Do was in having multiple cars stashed for a getaway.  As well as the pure craziness of Deok Bae in winning the game of chicken between him and our con man hottie.

It was also somewhat satisfying to see Seong Il succeed in tracking down the person who stole his money.  So yay for everyone for making that a great dramatic moment. 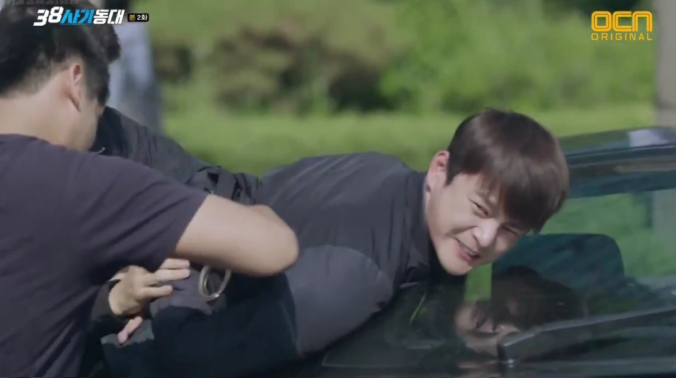 #5 Jeong Do’s reaction to being caught.

I found it interesting that for the most part Jeong Do didn’t try to talk his way out of being guilty.  He kind of just sat back and accepted the situation.  Jeong Do even admitted that he was punishing all of the people he swindled because they were evil.

It was just his lack of luck that he accidentally swindled the wrong Seong Il from City Hall.  Jeong Do plays one last card before being carted away.  He told Seong Il that if he wanted, he would help him get all the back taxes out of Bankrupt Baddy. 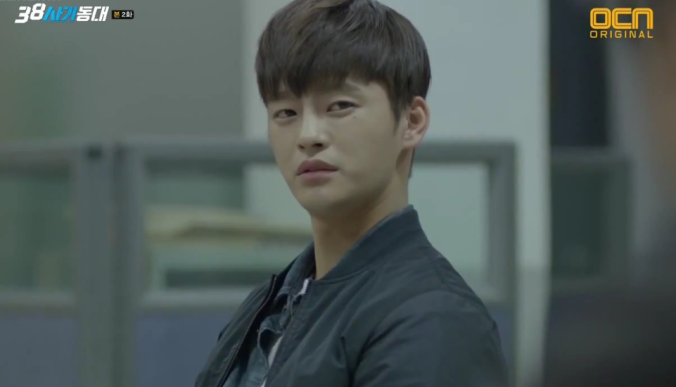 An offer that became a lifeline when Seong Il finds out that he is being accused of bribery by the vengeful bad guy.  Seong Il soon finds his options dwindling when both of his bosses (including the real Seong Il, who was supposed to be punished) end up holding hands with Bankrupt Baddy.  They order our taxman to take the bribe or be destroyed. 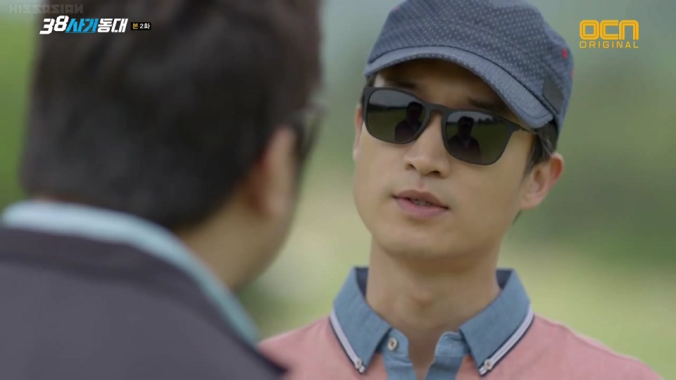 Seong Il realizes that this must be what happened to his friend six years earlier.  He has a flashback to his bestie also being accused of bribery and Seong Il not completely trusting in his friend’s innocence.  But things become much clearer now that he is the one being accused. 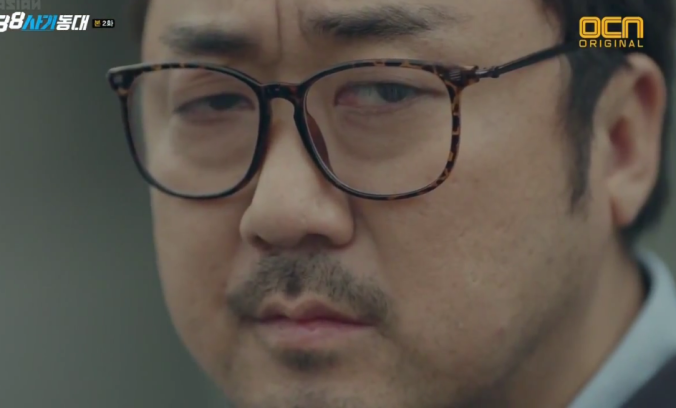 Episode 2 concludes with Jeong Do being transferred for booking, only to find himself handed over to Seong Il instead.  Seong Il inquires if they can really take down Bankrupt Baddy?  And so an epic bromance begins.

This episode was as good, if not better, than the first.  Especially since there was significantly more Seo In Guk this hour.  We also had Seo In Guk wearing glasses which is always a win in my fangirl book.

I loved that we got so much great setup for what is to come.  We now know why Seong Il is willing to bend his ethics a bit by using a small fry to take down a big bad guy.  And while we see that Jeong Do is indeed a con man to the core it looks like there is some serious backstory waiting to be discovered.  I can’t wait to find out more about his past and how it somehow connects to the current events.  Because if nothing else, you know that these characters are somehow all interwoven thanks to that little thing called kdrama fate.