Sometimes you just don’t have enough time to watch a whole 16 hour drama.  Which makes a web drama or drama special the perfect solution.  Ranging between 2 to 6 hours these are the perfect quick pick me up for the drama addict in a rush.

I had a really hard time picking a favorite, all of these appeal to me for different reasons. It was also really hard to narrow it down, because during this post I noticed that I really, really like the short dramas. I could easily have had a top 10.

Secret Message- This drama tugged at my heart for so many reasons.  I love Big Bang, so I really enjoyed watching T.O.P play a role that really showcased his goofy side as well as his serious side. I’m also a huge romantic and I love any kind of a second chance love story, so I was already in love with the idea of this drama. Most of us at one time or another have tried to call or message someone we know will never answer, so the premise of this drama is something we can all relate too. This drama has our OTP’s lives criss crossing in so many ways even beyond the text messages.  My favorite scene has to be when the lights go out and Woo Hyun calms Haruka down by showing her how to light the room back up. We all know T.O.P can light up a room, right!

One Sunny Day-I adore So Ji Sub, and this character was not like his normal rich chaebol or tough guy character.  He plays a regular man who is getting over a bad breakup and is in Jeju for work.  It’s a case of what can go wrong will go wrong as he is robbed while staying at a hostel and he keeps getting mixed up with another traveler who was also robbed. The two travelers combine their resources until their items can be replaced and a relationship is forged. This story has a really interesting and fun twist, I actually laughed when it was revealed. It’s one of those kismet moments where you go, yes! they were fated to be together!  Jeju features in several dramas, but this one really made me want to go and visit.

Another Parting–I really wish this drama had been a full length drama. Seo In Guk is an alien who is trying to find out where human tears come from.  He meets Wang Ji Won’s character Ha Na as her life is falling apart and she contemplates the end. The drama asks what it is to be human, but in such a way that it’s not hokey. This drama really needs to be watched twice to get the full effect, it jumps around in time so at first it feels a little disconnected, but it comes together beautifully in the end and makes complete sense the second time around.  I would really like to see these two actors star together again.

My Little Lover (Japanese Web Drama) Pure fluff and fun, this story is based on a Thumbelina type character they call the One Inch Princess.  Chiyomi is in love with Minami, her neighbor and former childhood friend.  They have a fight and Chiyomi, whose feelings are hurt, runs out into a storm and takes shelter in a cave they used to play in.  She wishes that things would be like they were when she was little and falls asleep. When she wakes up, she is only a few inches tall. Minami is the one who finds her and he hides her and protects her until they can figure out how to get her back to normal.  This was an adorable little drama, it kind of struggles in the second half, but it’s worth finishing.  Minami’s Grandma is probably my favorite character.

I am not sure I am as huge a fan of web dramas as Clykatta, but I did manage to find several that I really loved.

Holy Land – This is not only an amazingly stylish and well-acted drama special, but it was my introduction to Shin Dong Ho as an actor.  Tragically, at least for we viewers, he retired from the entertainment business soon after filming this show.  But at least I will always have this action drama to watch when I am getting the urge for something edgy and gritty.  Holy Land is the story of a troubled teenager who finds out he has a natural ability to box.  He accidentally works his way through the best gang fighters on the streets. 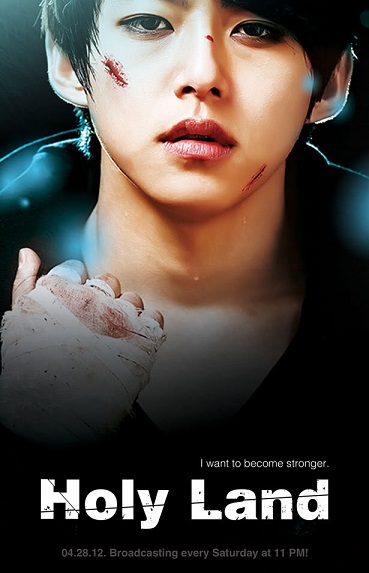 Go Ho’s Starry Night -This is the perfect web drama to watch if you are looking for a workplace rom-com. Go Ho must find true love among her co-workers which include her cranky boss, the sexy youngster newbie, and her ex-boyfriend.  It was a lot of fun and at only twenty minutes per episode, it was a super easy watch.

Splash Splash Love – Quirky leading lady goes back in time to the Joseon era and meets a super attractive king.  King accidentally believes she is a man and sexy hijinks ensue.  This is a cute two-hour special which is a must watch for all drama watchers.  It still has me praying that Yoon Doo Joon &  Kim Seul Gi hook up in another drama sooner than later.

Go Princess Go – Before you start yelling at me…..technically this is classified as a web drama.  Sure it is hella-long but I loved every crazy minute so I am still going to recommend it.  Who wouldn’t love a man sent back in time into a crown princess’s body and forced to deal with a husband and multiple possible lovers?  So many fun hours of sexual confusion and crazy situations.  Usually, things would get confusing, but the actress that plays Zhang Peng Peng totally pulls off the brashness of her male soul so you never have a confusion on who is really running the shots.

Hopefully this list will help everyone find new shows to check out.  What is your favorite web series or drama special?  Be sure to let us know in the comments.