We had an hour of filler this week. I have a feeling we will be seeing a lot of that in the last three episodes, now that the plot is wrapping up.  But when characters (and I do mean all the characters) are so likable, it is hard to really be mad about it.  So come join me as I discuss incompetent bad guys, cute male rivalries, and enough happy feels to gag a unicorn.

Can we first discuss how totally incompetent all the bad guys are?  And this is not really a complaint.  I actually like that there is no extreme angst when it comes to our mediocre bads.  The fact that scarface thuggling manages to get his payout stolen by the thieving granny cracks me up.  Then, through a series of misunderstandings, he doesn’t connect with his second bailout from Bad Uncle. Instead, he ends up abducting Bok Sil whom he thought was Ma Ri.  So many mistakes.  You just can’t feel real fear when it comes to these simpletons.

Aw…… I love that Louie and Bok Sil never change.  Whether it is with money or without, they are the exact same people inside and out.  As a special date, Louie buys all the couple items that he had been forced to return back when they were poor. I guess that furry purse monstrosity was just meant to be owned by Bok Sil.  You can’t fight fate even when it comes in the form of an ugly handbag.

I could watch a whole hour of Louie and Joong Won competing against each other.  They truly are the best frenemies.  Poor Joong Won constantly loses to his puppy nemesis, even in having the better ugly tracksuit. (Bwahaha.  I was hoping the #1 tracksuit would make an appearance before the end of the drama.) It was also satisfying seeing a second lead deal with his one-sided love and move on.  It is so rare that we see a gracious loser in love that I had almost forgotten how real life romances work.  Let’s hope that we will be able to see Joong Won find his own fated love before the end of the drama. 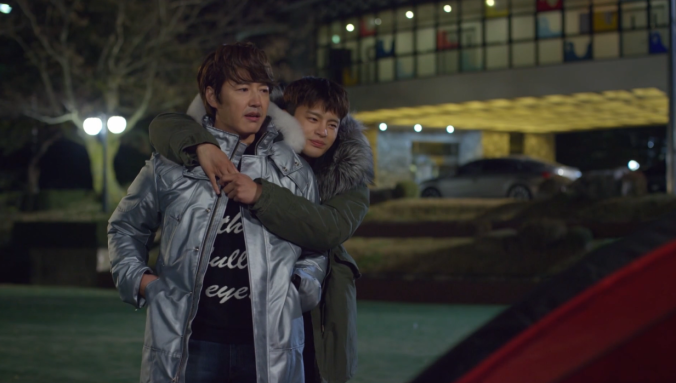 Joong Won might as well just give into the power of the Louie bromance.  He should know that you can’t stay upset with Louie.  Especially when Louie is throwing out hugs and tent snuggles like a bromance pro.  Bestie bromance back-hugs are the best.

All the fun and games come to a swift end when Bok Sil is accidentally kidnapped by Scarface. She was wearing Ma Ri’s coat and was abducted by mistake to force Ma Ri’s father to pay up.  Will this be a last minute angstfest?  I hope that we don’t spend long with this bump in the happy drama narrative since, as we all know, this drama’s strength is having our OTP together and happy.

0 thoughts on “Shopping King Louie Episode 14 – It’s all fun and games til someone gets abducted.”