I found that multiple times this past year my favorite dramas are not necessarily the ones that are getting all the ratings or social media buzz.  Which made me think that maybe we need a series of posts where I can attempt to make a difference.  Because good dramas deserve to be watched regardless of ratings.  So please join me in my first hidden gem recommendation Weightlifting Fairy Kim Bok Joo.

When this drama’s concept was first put forth I was totally anti Weightlifting Fairy.  I hated that they were going to take an actress known for her modeling career and try to make me buy she was a serious weightlifter.  A character loosely based on real life weightlifter Jang Mi Ran who is not a dainty flower.

I was worried that it would be all fat jokes and negative body images with little to no entertainment value.  Even after the show started airing I stuck to my guns and refused to witness, what I was sure was going to be the objectified humiliation of a plus size character (even though the actress is in no way plus sized.)

It took a lot of nagging and fangirling from my co-bloggers before I decided to give it a try.  I am so glad that I did.

Why You Should Watch

There are several reasons why I think this is a good watch.  The first being that our OTP (One True Pairing) has crazy sizzling chemistry that just makes me happy.  Nam Joo Hyuk (School 2015) & Lee Sung Kyung (Cheese in the Trap) are both relatively green actors and I would never have put them together just off the top of my head.  That said, they click in a way that few couples do.  They have chemistry as both friends and as a romantic couple and I could happily watch them interact for hours and hours.  Everything about their relationship is so natural and cute.  Somehow the director managed to take the stiffness out of both actors and make them crazy relatable.  Not only relatable but actually likable.

Another reason you should check this drama is that it is a sports drama that actually shows the positives as well as the pitfalls of competitive sports. So often we only see a skewed version of sports.  I am not saying that there isn’t a bit of that here and there but it is tempered by an equal amount of positives and negative situations.  For example, we see the various characters deal with combining eating and sports in a logical manner. Also, while the characters each must come to grips with why they are competing, it isn’t all helicopter evil parents in the background forcing the poor kids.  When it comes down to it, all the characters have to make decisions regarding their health and what they want out of life and sports themselves.  It is very refreshing to see this genre have a dose of realism that is often missing. 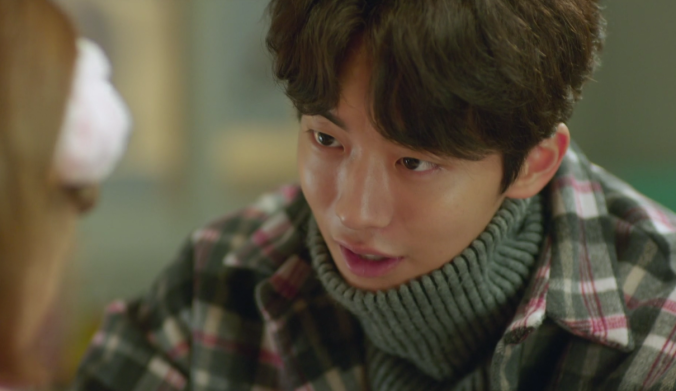 The final reason is this is just a feel good drama.  If you want the feeling of innocent noncomplicated love and slice of life moments with friends and family then this is the drama for you.  It is a drama that will leave you feeling happy and not anxious over what is going to happen next.  Something that is a rarity in the latest drama options.

Why I highly recommend this drama it isn’t all flowers and sausage perfection. For example, not all the side relationship/romances really have me fully invested.  I would prefer watching our main couple rather than the brother and his ten-year bestie that he is discovering feelings for.  Also, the coaching couple makes me want to FF out of boredom.  Thankfully, this is only around 10% of the show so it is easy enough to check my facebook notices or grab a snack before getting back to the OTP shenanigans.

The other minuscule issue I have is with Lee Sung Kyung’s performance.  Don’t get me wrong, I am loving her playing this character despite my initial resistance.  It is just that sometimes you can almost feel her trying too hard to become the character.  But in the grand scale of things isn’t it more important that I can tell she is working hard to project a character and it isn’t just Lee Sung Kyung playing herself?  I think with time this issue is something that Sung Kyung will overcome but as a newbie actor, this is just par for the course.

This concludes my first ever Hidden Gem post.  I hope it inspires you to give this drama a try and spread the love to other kaddicts as well.