Stuff happened this week…..slowly.  Which means that we are going to skip a lot of the filler and just focus on a few key events.  Which totally works since half of The Fangirls are stuck in the middle of Snowpocalypse 2017.  So join us as we discuss the best moments (what few there were) of Episode 16 & 17.

KMUSE: It is funny.  For the longest time, I wanted mother and son to find each other again.  But when they finally did it felt very anti-climatic. Which kind of is my feelings for most of this week so maybe it is just my mood when I watched.  Either way, Mom and Joon Jae are together again and Mom loves his girlfriend.

CLKYTTA: I was prepared for a Truck of Doom. I was prepared for some resentment and misunderstandings and maybe a good scream session.  Walking across the street and suddenly everyone being as close as kimchi and rice was not what I was expecting. I needed a little more angst in there, this was way too easy.

CLSunbae: Disagree!-ish. I mean, yes, I totally agree it was a bit anticlimactic but considering I was sitting on the edge of my bed, fists pressed into my mouth, so positive something bad was going to happen — what sweet relief at the sweet reunion! I mean, they already did a few of the near-miss meet-ups and the tearful longing to be reunited scenes so if they’d done a truck of doom or angsty fight, I would’ve thrown something at the TV. So I guess the question is: Is it better to be bored or mad?

Drama Geek: I was so relieved that there was no Truck of Doom that their tearful reunion was pure sweetness to me. And it felt natural that he wasn’t mad at her. He’s had lot of teenage years to do that and now he’s an adult. What I did think was anticlimactic with this reunion was the second lead girl getting what was due to her. Not one person freaked out on her for keeping them apart after she found out they were mother and son.

Dad is an Idiot

KMUSE: I have been pissed off at Joon Jae’s dad for his horrible life decisions for a while.  My dislike continues when he refused to listen to Joon Jae when he came to get him away from evil stepmom.  Sure he had some valid reasons for learning of Joon Jae’s conman past… but still.

It did provide for the only really suspenseful moments as Evil Blackwidow realizes that Dad is on to her evil schemes.  It was truly creepy how she was in the room watching Dad throw away his medication.  I wish all the bad guy scenes had been as intense.

CLKYTTA: Oh Dad, you have a proven track record of bad choices.  I mean, come on, Joon Jae’s mom is way better than Blackwidow.  He literally knows nothing about Joon Jae, no backstory as to why he lives like he does or anything.  This is why Dad is a disposable character. Drama Geek: I really want to slap Dad for judging his son. Joon Jae’s been on the streets since he was a teenager and he made a way for himself the best way he could. Unfortunately he was taken in by a slimy conman. I really do feel like Dad couldn’t admit to himself that he’d been wrong about Black Widow all along, so he was taken down by his pride.

CLSunbae:  At least Dad is consistent! Looking at the classy and sweet mom and the earnest son from the flashbacks, it’s hard for me to understand how he could’ve thrown them aside. But this scene kind of explained it for me: the guy’s got a major issue with blind pride. Add a sneaky fox who knows how to manipulate into it and I can see (though not necessarily understand) why Dad did the things he did. Honestly, if he’d gone along with Joon Jae, it would’ve discounted all the dad’s previous bad decisions. I’m kind of glad they didn’t go for the easy fix here. (Probably because they used their last “easy fix” card on the mom reunion.)

And yes to the creepy! So creepy! It’s funny how something as simple as a woman leaning against a wall quietly can give you chills for days.

KMUSE: I continue to love Cheong and how she is not a Damsel in Distress.  Instead of panic when she is confronted by The Killer she takes him down by erasing his memories. Cheong rocks.

CLKYTTA:  I was so proud of her for not cowering and facing Killer Reply Dad face to face, if I had to pick a superpower I would absolutely pick the ability to take people’s memories.

CLSunbae: YES!! I’ve been waiting for something like this to happen! I hate when Kdramas

give characters cool powers and then all but forget about them. I love how Cheong outsmarted him. I love how the moment was used to further her own story, too.

Drama Geek: Cheong’s rocks! I was so happy that she continued to be proactive in her own story. And I’m super happy she finally knows that whole truth.

KMUSE: I also appreciate how Cheong discovered the memories of the past through taking the bad guys memories.  It was a successful way for her to learn the truth.

CLKYTTA: I cried with her when she realized that Joon Jae lied about their past lives.  We all know why he did it, but now she is all worried about history repeating. KMUSE: It comes as no surprise that Conman Bestie is a bad guy in his past life.  It was again anti-climatic to see him hooking up with Evil Stepbrother historically.  It is already obvious that he is going to be going after Cheong now that he remembers that she is a mermaid.  I do wish that we had gotten more of a story for their historic evilness.  They kind of just showed up without any narrative significance which is annoying.

CLKYTTA: He’s going to sell her upriver as fast as he can.  I think he has been in collusion with Black Widow or Wannabe Bro for years.  He’s made a lot of money off of Joon Jae and no one does something for nothing.  I’m going to bet Black Widow has been keeping tabs on Joon Jae through Conman Bestie for years.

CLSunbae: Agreed. The revelation of him with the step brother confirmed what I suspected — he’s in cahoots with them. He was then, he is now.

Drama Geek: I’m not sure I’d jump from this past revelation to the fact that he’s in cahoots with Black Widow and Suddenly Evil Stepbrother. I feel like he’s only out for himself and when he saw how talented Joon Jae was he took advantage of that. It’s been pointed out that he lives off of Joon Jae and that’s what he’s done since he first met him. Now… did he actually look for his mom as hard as he said he did? Probably not. And is he going to try to see Cheong without blinking an eye? Absolutely!

Dad Bites the Big One

KMUSE: Dad really brought this on himself due to horrible life decisions. So I don’t have much sadness for Dad’s passing.  If he had been more proactive in those last days (he even had his phone that whole time) he might not have been killed by his psycho wife.  I guess his last confession to Joon Jae gives us a bit of comfort but still the situation could have been avoided if he had been less of a selfish idiot.

CLKYTTA: This is what happens when you try to justify your stupid decisions in life instead of letting people who love you help you.  It’s classic Narcissist 101, he’s made his decisions and he’s going to stand by them because he knows what is best.  This is probably why Joon Jae and Mom’s reunion was such a nonevent.  Poor guy needs at least one parent he can depend on.

CLSunbae: I’m gonna say it — I’m glad he died. The guy was irredeemable. The way he treated his wife and son in the past. The continued blindness (pun intended) in the present. There was no way to redeem him and if the writernims had tried, I would’ve been annoyed as all get out. Dad got what he deserved. Buh-bye.

Drama Geek: What more can I add? His character was just a plot device and I never felt one ounce of sadness for him. I do feel horrible for Joon Jae who will feel like he couldn’t save his dad. 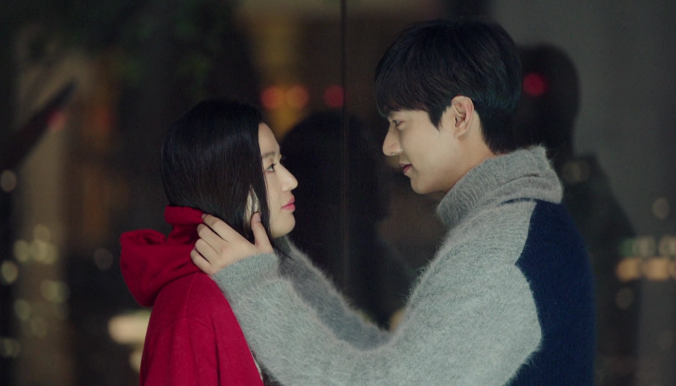 KMUSE: So much filler and not enough OTP (One True Pairing).  I am ready for the show to be over but we still have 3 episodes to go.  This is, yet again, a drama that would have been stronger with fewer episodes.

CLKYTTA: It’s still good, but it’s starting to drag a little and 16 episodes should have been plenty.  Hopefully we have turned a point and things start happening again. I’m bored of Evil Reply Dad’s amnesia already.  I feel like they are kind of struggling when they suddenly flip it so that Tae Oh is interested in annoying girl too.  The OTP is still holding my interest, but I’m glad we are on the downside of this drama.

CLSunbae: I’ve been enjoying this show in a passive way (it’s not lighting a fire in my like Goblin is or Kill Me Heal Me did). It’s a cute, fun watch but not much more and as such, I need these episodes to pick up the pace.

Drama Geek: 16 episodes would have kept this drama at a much tighter and face paced show. And I wouldn’t just be ready for it to be over already. Hopefully with the last 3 episodes we can dispose of filler and just finish out the plot with lots of great OTP moments.

Thanks for joining us this week and hopefully things will pick up now that we are starting the last three episodes.