We finally have the character development I’ve been hoping for with Bong Soon. Let’s hope it sticks.

I’m going to get this off my chest. How hard is it to have a strong female hero who is also smart? I’m not saying Bong Soon is dumb, but she’s also not quick on the uptake either, and she only has one purpose so far. Moon over Gook Doo. Thankfully, she decided to take up the scepter and use her strength to catch the bad guys.

So let’s count down the things Bong Soon did and see how it brought her to her decision.

Being Strong Isn’t all Fun and Games

She gets her own little office within Min Hyuk’s office and watches him be all CEOish. I do think for a moment she’s impressed by him. Then she gets a call from her mom and finds out a video has been leaked of her pole dancing episode the night before.

I bring up this plot point for the flashback that we get from Min Hyuk. A very drunk Bong Soon just keeps crying about how she can’t help how strong she is. This is the first time we see that she might not be as happy about being strong as she lets on. Well, that and the fact that she cries at superhero movies. Being different is never easy.

Stronger than both guys put together. Still let’s them throw her back and forth like a ping pong ball.

I am not a fan of the boys handing her back of forth for protection. Sure, Min Hyuk is aware she doesn’t really need it, but they still fight over who’s going to protect her. And she just sits there and loves it. I really wish she’d let Gook Doo know that he’s free to do his job and not have to worry about her.

Even though  the boys fight over who’s going to protect Bong Soon, she still goes back home for the night. The girls gossip about the boys for a while then decide to make something yummy to eat. The BFF goes to the store while Bong Soon starts the stew. Too bad for her the Polygamist Kidnapper is out shopping too. He brutally attacks the poor girl.

Thankfully, Bong Soon arrives in time. She wounds him but is so distraught over her friend that he manages to get away.

I don’t think Bong Soon feels helpless very often, but seeing her friend hurt and not preventing it seems to bring that feeling to full force. I will giver her credit that she does realize it was stupid of her to let her friend shop alone at night.

Here is where I’m frustrated with her as a character. The only time she seems to worry about the danger is when it’s right in front of her face. The rest of the time she frolics around after Gook Doo or is irritated with Min Hyuk. Even his stalking dilemma doesn’t seem to register with her most of the time.

After the attack on her friend, Bong Soon seems okay at first, but once she’s alone with her own thoughts she realizes that she can’t just lock herself away in a different neighborhood and do nothing. She sneaks out of Min Hyuk’s house and wanders the streets. Min Hyuk follows her and when he makes his presence known she tells him why she’s out there. She’s never done anything important with her strength and she knows it’s time she does. Yay, stop kicking random people ass and start getting the crazy bad guy.

Ji Soo’s character isn’t doing it for me, but there are still some really cute Ji Soo moments throughout the episode. I can’t add his voice to this picture, but it was dreamy. Of course, this is a daydream but he did grumpily tell Bong Soon not to wear pretty things. Which means he notices what she wears and thinks they’re pretty.

He is also adorable when he’s overly worried about her, as long as he’s not shouting at her.

Gook Doo is on the verge of admitting he likes her. Maybe he already knows he does and has since high school or it’s possible he never realized it before. But he has it bad for her, and unfortunately I’m not sure I’m going to enjoy when she finds out.

Min Hyuk also had some pretty adorable moments. He’s the smart one of our duo and he picks up on the fact that Gook Doo likes Bong Soon. Poor guy is praying she’ll never realize it. His tantrum after seeing Gook Doo drop her off was epic. Though I’m not sure pictures do it justice…. okay I had to watch it one more time.

He spends most of the episode honing in on Bong Soon’s insecurities and just watching her with dreamy eyes. He also makes sure the video of her at the bar is taken down.

Last random thing: the show made sure we saw that our kidnapper is ripped. Not sure why that’s important. But now we know he’s young and fit. And creepy as hell. 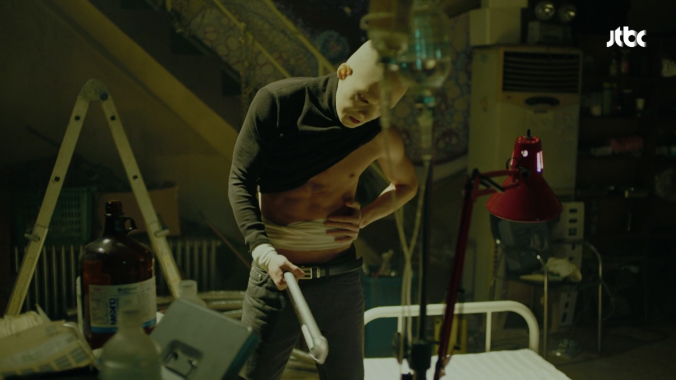 The shows biggest weakness is the tonal difference. It’s starting to pull the two stories together, but I’m not sure it’s enough for our characters. Gook Doo is in constant policeman mode. He’s either barking at Bong Soon to be safe or running around with his not so smart police division. Min Hyuk is firmly in a rom com. Going from scene to scene falling for our girl. That leaves Bong Soon in some weird romantic super hero show where she performs random acts of strength, while crushing on Gook Doo. She flits around and doesn’t do her job as a bodyguard. Doesn’t think to go with her friend to the grocery store. Doesn’t think to tell the police immediately when she runs into the bad guy, picking up a certain scent on him. And that is just our main three. We won’t even go into the side characters.

I know I sound like I don’t enjoy the show. I do enjoy it, but I think I’m most upset at the waisted potential. How often do they have a woman as a super hero type character in a drama? Not often. I want to see her being just as badass as let’s say, Vampire Prosecutor or any other genius male character that fights crime. And if she isn’t going to be that then lets make this a straight up rom com so I don’t feel disappointed in her for being less.

What do you think? Am I being too hard on her? Bo Young is doing a stellar job as Bong Soon and I love her acting. I just want to love her character too. Maybe once she finally starts falling for the super adorable CEO, I’ll be able to just enjoy the ride.