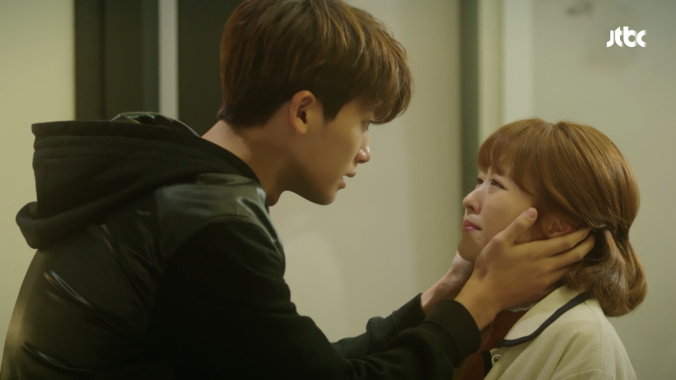 We are heading toward the home stretch and a lot happens in this episode. People are rescued, FINALLY. Bad guys aren’t scary. The writer tries to give depth where it’s never existed. I’m keeping this short and sweet because I’m sure you’re tired of me complaining. Don’t worry, KMUSE got all the good stuff this week, so check her recap out after you slog through mine.

I was a little annoyed that the writer had both characters go back home and sleep after the cliffhanger last week. The urgency of saving her was lost because they needed to fill the hour. Bong Soon freaks out. He calms her down, and makes her promise to not do anything by herself. He does sweetly give her a necklace, but then just sends her home while he works on some program. 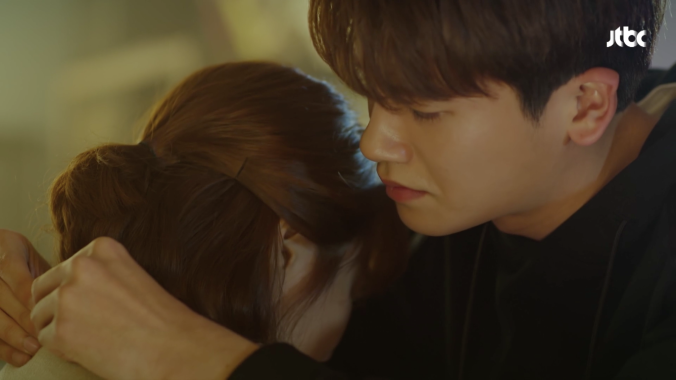 I realize they have no proof that the guy has killed anyone yet, but they also have no proof that he’s keeping them alive either. So their logic of not responding to the situation immediately is so frustrating. (And maybe I’ve been watching a little too much Scandal this week. The clock is ticking, people!)

Bong Soon wakes up and watches the video again, realizing she can hear the shop goon welding so she runs off to the junk yard.

At the same time, Min Hyuk’s program finishes and it shows him that there is some kind of structure underneath all the piles of junk. Um…. couldn’t we have created this program several episodes back while you guys were working on some video game instead?

Bong Soon gets to the junk yard and hulks out, which lucky for her pops open the door to where the girls are. You know, the door Gook Doo opened and looked inside, but didn’t really ever come back to look in it again.

Kidnapper sees her coming and escapes with Bong’s Soon’s BFF. He leaves the other girls behind. He calls the shop goon to tell him to take care of the girls. I guess he has dropped his original obsessions for Bong Soon.

Bong Soon finds the girls in their cells, but before they can get out the exit explodes. They never show how she got them out with fire blazing in their path, but we’ll just say she did it with her strength.

Of course, Min Hyuk and Gook Doo get there after it’s all over. And here is a jean ad, just for you.

Then we have what I call manufactured angst and depth. Min Hyuk is upset that she went to save her friend alone. Well, if you would have been more proactive the night before she wouldn’t have had to. He flips out on her, and she says that she can’t stop being who she is, and if he can’t deal with it then they should part ways.

Oh writernim, you can’t have Bong Soon barely care about getting the kidnapper and using her powers, and Min Hyuk encouraging her to use her strength the whole time, then just have them switch stances. I wanted to connect to these two during this part, but I just couldn’t.

Bong Soon’s BFF is still missing, but the police don’t know that part since Bong Soon is keeping it a secret. Per the kidnapper’s instructions. So there is manhunt for him, but no one knows he still has a girl with him.

He contacts Bong Soon and tells her he’ll exchange the BFF for her as long as she agrees to marry him. He sends her an address. Min Hyuk must have put a tracker on Bong Soon so he knows when she leaves her house. He calls Gook Doo and they both head toward the location. There’s a throw away line where Min Hyuk says Gook Doo is the only police officer he can trust, and my heart hurt for the lost potential with these two. They had cracktastic onscreen chemistry and it was just wasted.

When Bong Soon gets there, the kidnapper has a lift rigged to fall and crush her BFF. So she does the only thing she can, and runs to stop it.

When she throws it off of them, it goes flying and so does the masked person in it. If you’re surprised that it’s some random innocent person that she hurts (kills?) then you haven’t been paying attention.

The kidnapper goes in for the kill now that she’s weak. He’s not messing around because he has a shot gun trained on her. Except he decides to choke her instead of shoot her.

Min Hyuk arrives to save her. Thankfully, Park Hyun Sik is actually good at martial arts in real life, and we get a pretty good fight scene. Unfortunately, these scenes are dark and they don’t turn out that well in screenshots.

The killer does get away, but Gook Doo arrives with his trusty gun and shoots the kidnapper as he’s trying to get away in the car. Bong Soon collapses in Min Hyuk’s arms and passes out.

Does the supernatural force that has endowed Bong Soon with strength not know that the kidnapper is actually the one who hurt that man? He put him in harms way, and she accidently harmed him. But didn’t she do that with Secretary Kong? I mean, she broke his tail bone in three places. She broke Min Hyuk’s toe. And… I’m pretty sure there is another innocent person or two along the way.

If we set that detail aside, the reason this plot point falls so flat for me is Bong Soon herself. She lived hiding her strength and not using it for almost her whole life. She meets Min Hyuk and then things snowball from there because of the kidnapper. But there were only moments of her really embracing her strength. And in her work, and daily life, she doesn’t rely on it. Nor does it actually define her as a character. So taking it away from her isn’t that big of a deal. Now she can develop the game she wants and run off into the sunset with Min Hyuk. And I’m assuming that is what we’ll get for the home stretch. She’ll wrestle with losing her strength and finding out how that changes her relationship with Min Hyuk, and then they’ll live happily ever after making the most beautiful babies, one of them being a girl and starting the strong woman cycle anew.