I once compared our heroine to Cinderella. But she left our Prince Charming with a lot more than breakable footwear. We finally learn what was in the mysterious box. And it’s terrible and hilarious, all at the same time. If only Yoo Mi had a fairy godmother to warn her of the embarrassment looming on the horizon. 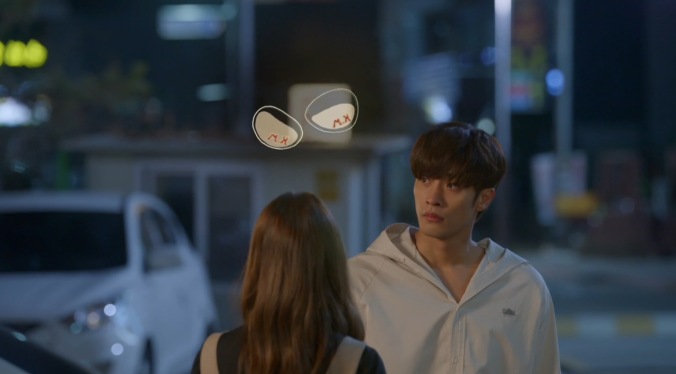 At no point in the Disney version do I remember Prince Charming declaring, “I am not a pervert!” Yoo Mi may have seemed like Cinderella running away from her true love three years ago, but her story includes a few unique details. It seems she left her breast enhancer in Jin Wook’s car that day and he’s hidden it away in an ornate box. When Yoo Mi visits his house and her little brother accidentally breaks the box’s hinge, she puts it back without looking inside and hopes her picky boss won’t notice. Not only does he notice, he worries that she now thinks he’s a guy with a weird fetish. The conversation when the two characters talk at cross purposes about the box’s contents is rife with comedic misunderstandings. I imagine there won’t be a hole deep enough to hide in when Yoo Mi finds out what’s really in there.

Cha Jin Wook is a sad, isolated, gorgeous island. After a long business trip, he plays conversational ring-around-the-rosy with Butler Bestie about how hungry he is.

How about a restaurant?

How about a company meal?

What a great idea!

Now that he’s given himself permission to call Yoo Mi, he orders her to deliver food to his place. Jin Wook enters the house with a spring in his step, until he finds an empty kitchen and a note from Yoo Mi with the food she prepared. He even brought coffee for two.

We already learned other lonely facts about his solitary existence when the heroine explored his home. It appears sleeping on the couch isn’t just a habit, but a necessity since he doesn’t have a bedroom. This is the same house he was living in three years ago, which is further proof that he’s not the swinging bachelor some painted him to be. The tragic mother backstory that was alluded to in episode one has been placed on the back burner for now. But I’m sure this is at the heart of his trust and abandonment issues.

At least someone made a move

Relationship progress was made in this episode. Just not by the main couple. Yoo Mi’s deadpan co-worker has no problem making the first move. She passes Secretary Jang in the hall, remarks that she misses his polka dot suit, and then openly wonders if his underwear matched. Since Butler Bestie is not part of the OTP (One True Pairing), he doesn’t have to misunderstand for eight episodes and he immediately asks for her phone number which she spits out at lightning speed. Now if they could only give lessons to our other pair on how to be direct with your feelings.

It felt like the side characters got an awful lot of time this episode. Hyun Tae is getting the full-on supportive superhero treatment as he takes Yoo Mi for motorcycle rides and cuddles sleeping children. But the writers can’t fool me. There’s no way I’m rooting for the guy who’s doomed for the Second Lead Scrap Pile at the end of the show. But at least he’s sane. I’m not sure I can say the same for Cha Jin Wook’s one-woman fan club. 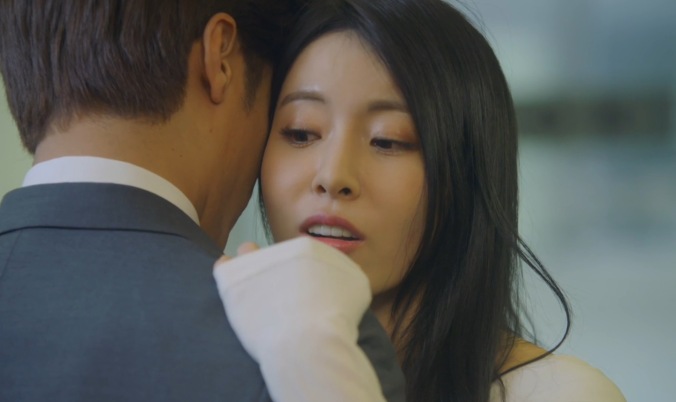 This girl can’t take never-in-a-million-years for an answer. She follows Jin Wook around begging for attention. Proclaims she’s not the mildang type who plays hard to get (which I actually respected, a little). And then states that Cha Jin Wook is her man because she says so. Call the guys with the net. She went from clingy to Crazytown in the space of 30 seconds.

What is with the epilogues? I expect them to shed more light on a situation and give us greater understanding behind the character’s motivation. Instead, we learn important information like the hero spun his out-of-town lunch like an edible Wheel of Fortune. Who cares! It feels like the director just adds a few more seconds to a scene that he originally cut for the story’s flow. If it wasn’t good enough to make the main episode, why show it to us now? Except for the one with Jin Wook fawning over his cutesy lunchbox and taking pictures. That was too adorable to stay on the cutting room floor. Still, I feel the epilogues could be used to greater effect.

This show manages to insert multiple risqué elements into its story without losing the sweet innocence at its core. A difficult line to walk. I enjoy the funny, outlandish elements but may start getting antsy if we don’t get some progress for our romantically-challenged duo soon.

Epilogue: When DramaRookie has nothing more to say

I’m done. No earthshattering insights into the episode. I just figured if My Secret Romance can do it, so can I.

0 thoughts on “My Secret Romance: Episode 4 – That’s no glass slipper”