Life has been crazy busy lately and I am so sorry regarding the delay in my recaps.  So in order to play catch up I am giving you episode 5 the abridged version.  Luckily this episode was slow on the mass murder side of things and heavy in the moral decision-making which will allow me to breeze through so you and I can move onward.

To do a quick summary of the mystery aspect of the episode….. and I do mean quick since ep 6 awaits…. There is an attempted assassination of the Superintendent General which is blamed on the Yamashiro Yakuza Gang (Tatsuya’s organization’s rival who was in cahoots with the bad cops).  This gives the police the excuse to go in and arrest the head honchos.  Instead of being arrested though, the bad cops murder the leader of the Yamashiro group before Tatsuya could get to him first.  Thank goodness we did not have one of our usual five different murderer plots this week for the sake of our speedy minicap.

Remember that we left the always sexy Tatsuya back in the office of the Healthy Living Co. with a dead body and a picture of his Sensai in a cop uniform.  Tatsuya is interrupted by two men who claim to be cops from the public safety division.  These are really thug cops from the secret, top of the top, organization within the police dept.

Tatsuya manages to allude them in the beginning, but is shot in the leg as he runs away.  A hex upon your manhood for damaging Tatsuya’s perfect and precious body! That’s right… a fangirls curse is a scary thing.

Tatsuya manages to pull himself off the ground (putting his glasses back on – SO COOL) and pulls a gun on the two men.  SEXY SEXY SEXY… But just as he begins to demand answers, smirky cop comes up behind him yelling that Tatsuya put down his gun and place his hands behind his head.  NOOOOOOOO.  Smirky Cop had been tailing our sexy Yakuza and does not take it well when the two thug cops order him to stand down and hand over Tatsuya.  Even after learning they are public safety. (Side note: Anyone else thing that is just not a very scary name for a super secret thug cop department?)  Thankfully Smirky Cop stands down for no one and refuses to give over his perp.  He also tells them that he has already called for backup, which has the two thugs running.

Tatsuya slumps against the wall after the thugs escape and tells Smirky Cop that there is indeed a dead body up in the president’s office, but that he had nothing to do with it.  Smirky Cop tells him to stay still while he checks the crime scene and that he will get Tatsuya to the hospital in just a minute.  Insert eye-roll as Tatsuya leaves the scene as soon as Smirky Cop is out of sight. 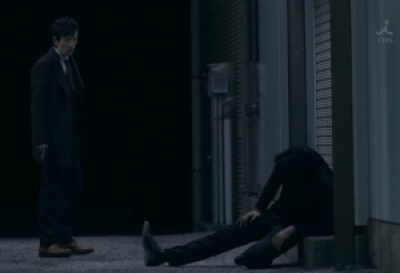 Poor Ikuo is having his own problems now that he has to be on constant guard against Hibino, who openly asks him about his relationship with Tatsuya Danno.  He lies, and tells her there is no relationship, but things are awkward from then on.  Hibino is torn, not wanting to suspect her partner, but openly tells Ikuo there is no forgiveness if he is dirty.  The episode is scattered with moments between Hibino and Ikuo where she does small comments that dig the knife of guilt into poor sweet Ikuo’s heart. 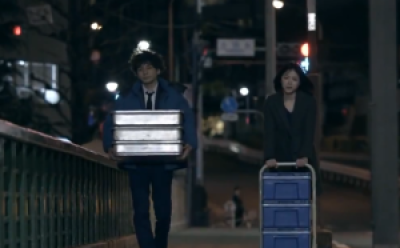 Things do not get better for our poor sweet cop when after he confesses about Hibino’s suspicions and uncomfortable questions. Tatsuya says that Ikuo should be prepared to kill Hibino if she becomes a danger to their plan.  That does not go over well at all and you can see some slight distancing of Ikuo from his BFF.  I swear if this girl Yoko Ono’s our boy’s relationship I will be hella pissed off.

My favorite scene of the episode is, as usual, an action scene. I might be in love with the action choreographer as much as the two main actors. The combo of the three has me all atwitter. While searching for the Yamashiro head boss, the police enter a nightclub he is known to frequent.  Hibino is captured by one of the yakuza underlings and is held hostage with a gun pointed at her head.  All of the police stand at a distance with their guns drawn and are obviously rattled.  Everyone except Ikuo whose gun and stance remains cold and still, his gun sights trained on the perp.  As the thug gets more and more agitated Ikuo makes his move grabbing Hibino from the man’s grasp.  Then in one swift move, he turns back and shoots the bad guy.

Hibino stares up at Ikuo as if she had never seen him before.  Which really, she hasn’t since this is the first time his inner self has been present during a police takedown.  While Hibino might be having reservations about her partner, I personally am totally squeeing at the TV screen because that was super sexy and a joy to watch. 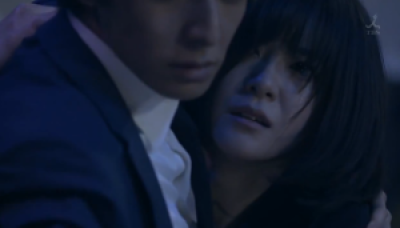 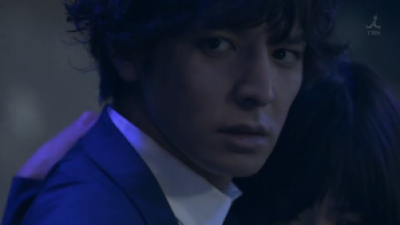 Hibino continues to annoy me with her black and white outlook and how it is making Ikuo waver.  I don’t want to see anything come between our two guys, especially a girl who tends to be overly judgmental.  I am also interested in finding out who is pulling everyone’s strings in the background.  Is it the men with gold watches or is there another player on the battlefield who is playing puppeteer? The last few episodes have had the bad guys referring to someone else orchestrating events.  Also, now that we are veering from the manga, I am interested to see what new plot lines the writers have in store for us.

Check out our Facebook page or follow us on Twitter (@amberkmuse) for info on all our newest recaps, posts, and to join in our kdrama discussions. https://www.facebook.com/pages/The-crazy-ahjummas/336988683021748?fref=ts