So pretty. So petty. I just love this part of a drama. When the hero is all twisted up in jealous knots and acting like a raving lunatic. It’s so entertaining!

What are you, five?

Cha Jin Wook amped up his metaphorical pig-tail pulling this episode as he tried to get and keep Yoo Mi’s attention. I wonder how much weight he’ll gain with his childish antics? He ate dinner, and then a tonic, then another dinner, then another tonic, and followed it with a ramen chaser. His ulterior motive was keeping Yoo Mi away from her supposed boyfriend. And he succeeded. She’s stuck at work and misses her not-a-date at the Han River with her hot, but platonic (Yeah, right. Not if HE has anything to say about it) friend.

The makeshift trivet deserves its own section. Jin Wook discovers that Hyun Tae is a famous author when Secretary Jang is reading one of his books. The pettiness reaches an all new low as our leading man not-at-all-accidentally drops it on the ground and then later uses it as a coaster for his pot of ramen. Why do I find this so funny?

It appears that Hyun Tae is just now discovering his deeper feelings. I guess he hasn’t been pining away since High School. Maybe it took Mr. 3-Meals-a-Day to make him realize what he was missing. He’s still getting the second lead hero shots while he plays basketball with gorgeously lit trees in the background, provides a broad shoulder for Yoo Mi to pass out on, and takes care of cute little brother. (May I just say what a kick I got from the realization that Koreans stick Bugle chips on their hands like pointy fingernails, just like we do. Some things are universal.) I wish there was a wisecracking mutual friend, the Kim Seul Gi type, in the mix so that he won’t end up alone in the finale. But it looks like it’s inevitable since there’s no other significant, available females in this drama. Stalker Chick doesn’t count.

This girl . . . sigh. I am thankful to say I have never known someone this pathetic in real life. When you ask a man if you can ask him a personal question and he says “No”. Emphatically. Over and over. Don’t ask the question. Did she really think this would force him to date her? Her plans make no sense. Although I do have to hand it to her, ordering the fancy box lunches so that Yoo Mi’s food went to waste was pretty crafty. And also stupid. Now Jin Wook is double mad at her. So, basically another fail.

Butler Bestie got very little screen time in this episode. But did anyone notice he took one of Yoo Mi’s sandwiches? I just luv him.

This guy works with what he’s got. It was the little things. Not the grabbing or spinning or holding on to her arms.

The way he keeps invading her personal space really gets to me. In a good way. 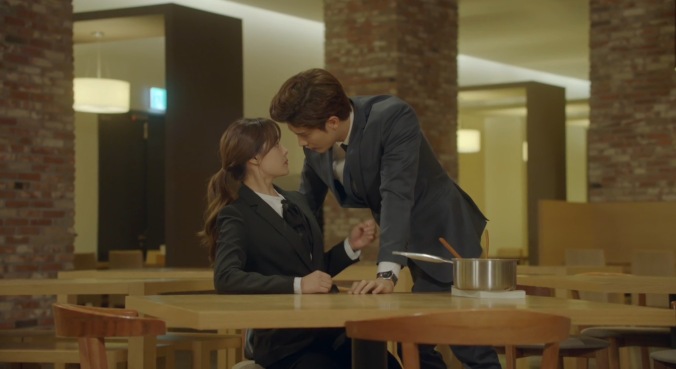 His little smirk when she hiccupped. So arrogant, yet somehow attractive.

I even liked how he slowly slid the chair out from between them.

This scene worked because of the actor’s charm, but also the directing choices. Now that the show has settled into a rhythm, I appreciate the way the people behind the camera are choosing to shoot it.

I also appreciate the light touch in this episode. I can use a good laugh on Mondays. Can’t we all? There were a few tough moments. The reveal that Yoo Mi found out about her mother’s acting career when she started watching one of her movies with her school friends. Ooof. That was painful. No wonder she keeps herself on a tight leash. But, overall, the tone was peppy and lighthearted. I hope the antics aren’t over. Please keep them coming. Petty, petty please with a cherry on top!