Steamy kisses are nice. Really nice. But so is dropping your defenses and allowing the person you like to see the real you. Our main couple discovers that when you decide to be with someone, it affects more than just the two of you.  And the shock waves are still being felt.

Dong Goo, I am your father

Jin Wook pulls a misguided Darth Vader and thinks that Yoo Mi’s brother is his son. (I know there was discussion among viewers that he truly might be, but that would be seriously disturbing at this point. The affectionate but cavalier way Yoo Mi treats the little boy is totally in line with a sister, but all kinds of wrong as a mother.) He wrestles with the idea of fatherhood, but ultimately decides to embrace the role, even commissioning a matching underwear line. I like that the show takes time for his inner struggle, instead of painting a rosy, unrealistic reaction of “Hooray! I’m a dad. It’s what I’ve always wanted.” Jin Wook’s abandoned childhood affected his idea of family, and he’ll have to overcome that. We already see the nurturing side of his personality in the way he cares for his cat, even giving up his cherished blanket to her kittens. Dong Goo will be good practice for him until the day he actually is a father.

The Third Wheel on your own date

Poor Yoo Mi. Outshone by her little brother. And she doesn’t know the real reason Director Cha insists they bring him along. They still managed to squeeze in some meaningful couple moments in the heart-to-heart about how they spent the last three years without each other. But it sure puts a crimp in our skinship time. If the kid weren’t so cute that you want to squeeze his little face, I might mind more.

This kid’s a natural

Where did they find the little boy that plays Dong Goo? He’s so stinkin’ adorable! I feel like drama kids often have that self-aware quality about them. Unnatural doesn’t matter as long as they can screw up their face and wail on cue when the sad scene comes. But this little boy seems unconscious of the camera. He plays with his toys, tugs on Ahjussi’s hand to get to the playground faster, and pays complete attention to his bowl of ice cream. Were there this many Jin Wook/Dong Goo scenes in the script or did the director see the drama gold and pile in as many as he could? 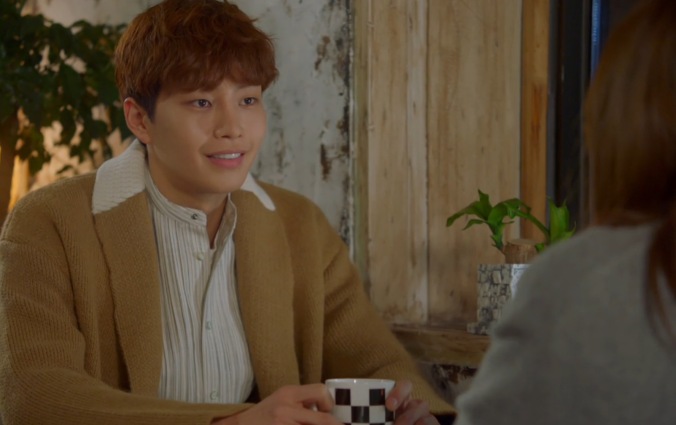 Second lead really stepped it up this episode. Stalker Girl was ready to steamroll in and ruin the seriously personal moment between Jin Wook and Yoo Mi, but Hyun Tae dragged her away, instead. I heart him so much for that. But he didn’t stop there! When he sees how serious the two are about each other, he steps aside without revealing his own feelings. Sparing Yoo Mi the awkwardness of rejecting him and feeling uncomfortable around her friend. I wouldn’t call this a case of noble idiocy. More like noble sacrifice. Hyun Tae cares enough for Yoo Mi to want what she wants. He encourages her to follow her heart, even if it’s leading her away from him.

Little, but I liked it 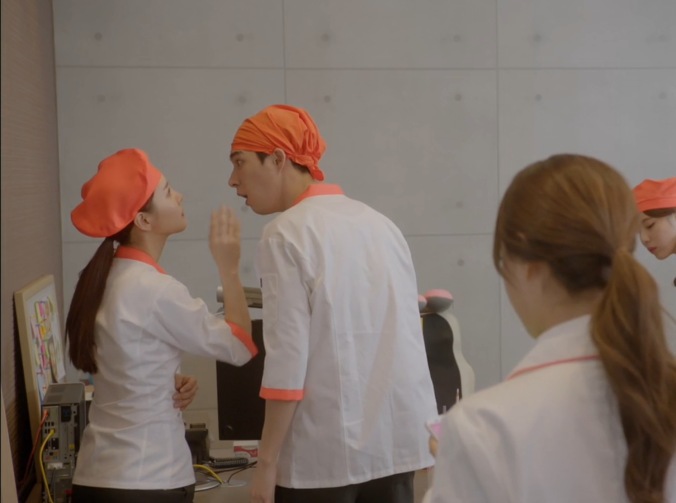 Sometimes I really enjoy the little moments. Racy Cook knows about Yoo Mi dating the boss and decides to whisper a little workplace gossip to Clueless Cook, who immediately announces it out loud. Which earns him a slap in the face. Maybe I’m too easy, but I laughed out loud. (I feel like I should put the proviso here that I in no way, shape, or form condone workplace violence.) It reminded me of the old slapstick comedy days of Abbott and Costello or Martin and Lewis. Sometimes over-the-top just works.

It looks like we’re nearing the end of our honeymoon period as the makjang clouds start to gather. Father Cha is aware of his son’s relationship and is none to approving. He pays a calm, but unfriendly visit to Yoo Mi at work and makes clear his expectation that the relationship won’t last. We could let this put a damper on all the squishy adorableness surrounding it, but I’m going to take Cha Jin Wook’s advice. Even when Yoo Mi tries to deny any unpleasantness, he tells her, “Forget whatever he said.”

Obviously, the main couple is in for some trials and tribulations. This is a drama, after all. But I’ve been repeatedly surprised by the leading man’s straightforward honesty and willingness to talk about their problems. As long as he keeps this up, and Yoo Mi doesn’t pull another disappearing act, everything will be fine.

0 thoughts on “My Secret Romance: Episode 9 – Romance takes a back seat”