With so many great movies becoming available (through legal subbing) we here at DWASOK are thrilled to watch them all and report back to our readers.  This week, we have chosen a true gem of a movie, so come join us as we discuss the tragicomedy (who knew this was a real thing?) My Annoying Brother.

*National judo athlete Doo-young (Do Kyung-soo) damages his optic nerves during an international event and loses his sight permanently. His older brother Doo-sik has been estranged from Doo-young; he takes advantage of Doo-young’s sudden crisis to get paroled from prison. To Doo-young, who lost his parents in an accident as a teenager and had to fend for himself since then, the news of Doo-sik coming back home is an extra stress to deal with.

KMUSE: I am just going to come and state that the teaser is totally misleading. I was expecting some cheesy upbeat comedy, and instead I got a black comedy tearjerker- hybrid that tore me apart… in a good way. I usually don’t say this, but I am thrilled that this is a movie and not a drama since I am not sure I could survive more than an hour of the emotional upheaval that these two brothers created. It is a wonderful story of family and overcoming adversity. My writing cannot do it justice.

I also would like to note the simplicity of the story. The writer didn’t muck it up with added romance or an overabundance of characters. It was a story about two brothers and 90% of the film just contains the two men interacting. I can’t even explain how much I hate movies/dramas that have a solid storyline but then feel the need to add romance to spice it up for ratings. Kudos to the writer for not falling down that rabbit hole.

KARIE: So, the movie *is* tear-jerker, but it’s not manipulative. It was funny and sweary and made me cry. I’m not usually a crier, but kdramas do it to me ALL. THE. TIME. My Annoying Brother was no exception. And KMuse is right — this was a simple, direct story. I thought there might be something romantic when Park Shin Hye showed up, but no. It was perfect and I loved it. I would definitely watch it again.

KMUSE: As I stated before, there are not a ton of characters in this movie. However, I think that there are two that deserve a quick note. Originally, the weird neighborhood guy annoyed me. However, by the end, I was a huge fan of this random guy who took up the mantle of helping the brothers through their hardships. The second side character is judo coach Lee Soo Hyun. I personally did not find her at all credible as a judo coach. The character could have easily been a childhood friend or even a nosy neighbor and had the exact same storyline. That said, I did like the concept of the character being there for Do Young’s recovery. So I will let it go since it was a small issue among a ton of good plot.

KARIE: The weird neighborhood guy made me laugh, mostly because when I first saw him, I pointed at the screen and yelled “Creepy Manager!” (Seo Woo’s manager in Cinderella and Four Knights) It was fun to see him as a completely different character, and totally cracked me up when he showed up as a priest and then confessed that he’d never finished seminary. At least his heart was in the right place! And having him as a not-quite priest made sense to me, because he obviously had a compassionate side, as shown by his friendship with the brothers.

Having Park Shin Hye play the judo coach was fine, in my opinion. Yes, the role could have been anything, but this is where she needed to fit because judo was EVERYTHING to Ko Doo Young. I really don’t think he had anything else in his life. But I was still so happy that there wasn’t a romance tangling things up, because I really wanted to see Doo Young learn how to stand on his own instead of passing from one caretaker to another.

I also found it interesting that the movie centered around Doo Sik instead of Doo Young’s tragedy. He was the glue that held the plot together, and it contributed, again, to the masterful simplicity of the story. 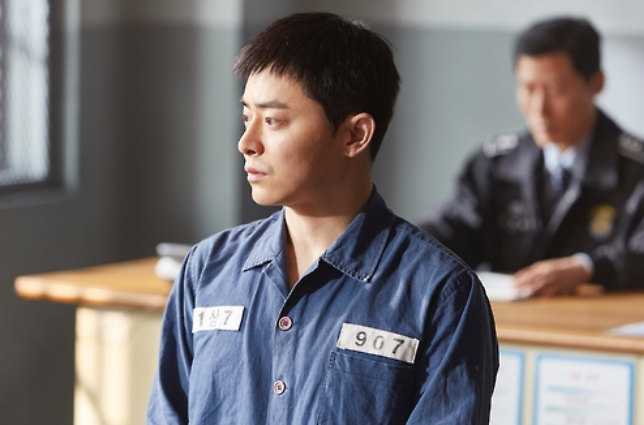 From the maknae’s perspective, I had to get used to Jo Jung Suk’s acting style. He’s very understated, holding back his emotions until they’re absolutely required, and then he lets loose. For me, it created a strong emotional impact. I honestly didn’t even know emotionless acting was a thing until I watched an episode of Happy Together and Yoo Jae Suk was teasing Lee Hyunwoo about his emotionless acting. It opened my eyes to this minimalist style and made me appreciate Jo Jung Suk’s skills.

KMUSE: This movie delivers when it comes to plot, acting, and everything in between. My heart literally ached for these brothers and their trials. I give it a solid 5/5 and highly suggest our readers go check it out. Sure, you might need a kleenex and some comfort ramyun to get you through it, but I promise it is all worth it in the end.

KARIE: I live for character growth and My Annoying Brother has it in spades.  With the well-developed balance between humor and sadness, I felt like it had so much depth. Really, this movie was masterfully written and masterfully produced. 5/5 for me too.

Side note: I’m a little more conservative, so the amount of swearing surprised me at first, and I definitely wouldn’t watch it with my kids.

You can find this movie on Dramafever and, in my opinion, it is the perfect way to spend a Friday night at home.  Also, be sure to check out our other movie reviews HERE!

5 thoughts on “The Fangirl’s Movie Review: My Annoying Brother”