It’s Drama Geek’s birthday which means it is time to celebrate with a new Korean Movie!  Thankfully one just happened to be in our local theater so we could celebrate in true fangirl fashion.  So join us as we discuss the claustrophobic thriller Tunnel!

KMUSE: SQUEEE!  This is the third Korean movie to come to Portland within a month.  I think we might finally be seeing the start of a steady stream of Kmovies.  I am so happy!  But I digress.  Let’s chat about Tunnel and how I am now terrified to drive through all tunnels.  I am so thankful I don’t live in a location where they are prevalent.  Remind me to never go to a Korean movie that involves any kind of Bridger disaster.  I might never leave the house again if that is the case.

A tunnel collapses due to poor construction and a man (Ha Jung-Woo) becomes tapped in the collapsed tunnel.  ‘Tunnel’ is based on the novel with the same time by author So Jae-won.

KMUSE: Most of the movie happened inside a very very small space which created intense feelings of claustrophobia.  I also might have a new fear of concrete.  Is that an official thing?  But the director did an amazing job of creating that little space and making it feel realistic.  I totally was ready to hyperventilate with the leading man.

I also was very impressed with how the director used the reporters to create various vibes throughout the movie.  Depending on where he put them, he created the feelings of humor, anger, and disgust.  Also, kudos for having a huge swarm of them and not acting like only a handful of people would be lurking during this type of event.  I hate when we watch shows and we are expected to believe that there is only one or two reporters that cover all the news.

DRAMA GEEK: When your entire drama happens inside a caved in tunnel or just outside it, you have to get creative with your camera angles. They manages to make me feel claustrophobic while we were buried in with Jeong Soo and then the enormity of the disaster when we were outside. The use of light was also something that can be tricky when you’re trying to show someone trapped. But they managed to use car lights to not only see where he was, but also to help create a sense of time and even convey isolation and loneliness.

KMUSE: I was not expecting much when I entered the theater.  To be honest I hadn’t even looked at the trailer before I agreed to go.  Even after I had glanced at the synopsis, I was expecting depressing intense disasters one after another.  I was pleasantly surprised to discover upbeat and humorous characters throwing out witty dialogue. I also appreciated that the plot moved fairly quickly and didn’t linger on the more depressing moments.  It kept me involved and not bogged down in despair.

DRAMA GEEK: Kmuse asked me if I wanted to go. I hadn’t seen the trailer, but looked up the cast. I’ve had a girl crush on Bae Doo Na ever since I saw her in Sense 8 and she is the reason I agreed to go, not even bothering to watch the trailer. I did not expect the humor they infused in this horrible situation. The lead guy isn’t some action hero. He’s just a father and husband who had some really bad luck. So instead of a thriller where he’s pushing through any obstacle just to save himself, we instead get a very human portrayal of what you and I might do if we were stuck under massive amounts of concrete. Even though the thriller part wasn’t pushed in our face, they still managed to make me sit on the edge of my seat wondering when they’d finally reach him. It reminded me of when Jessica fell down the well. If your not that old, you may have no idea what I’m talking about, but my family sat glued to our seats praying they’d finally get her out. That’s what I found myself doing during the movie. 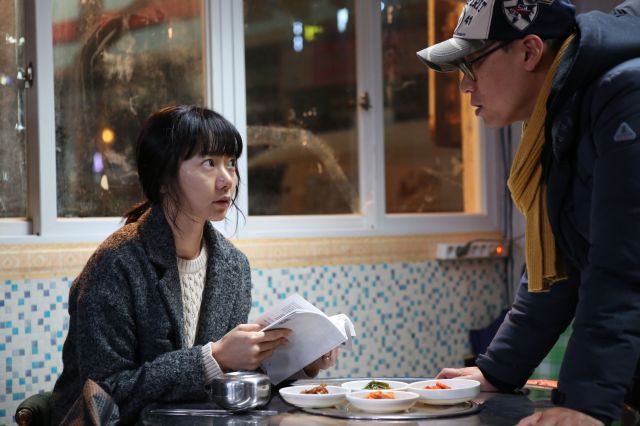 KMUSE: I am shocked that I really enjoyed this movie and would probably even suggest it over our previously viewed Train to Busan.  The humor was wonderful and I felt that I was watching a really positive and uplifting experience that shows the best of humanity. I recommend that everyone go and see if this is playing at your local theater.  It is well worth the time and money.

DRAMA GEEK: I totally enjoyed myself from start to finish. It may make you a tiny bit afraid of driving in a tunnel, but it’s worth it. I give this one two pugs and two bottles of something yellow, totaling 4 out of 5 safe trips through a tunnel.

6 thoughts on “Drama Geek & Kmuse’s Night Out To The Movies: Tunnel (Spoiler Free)”