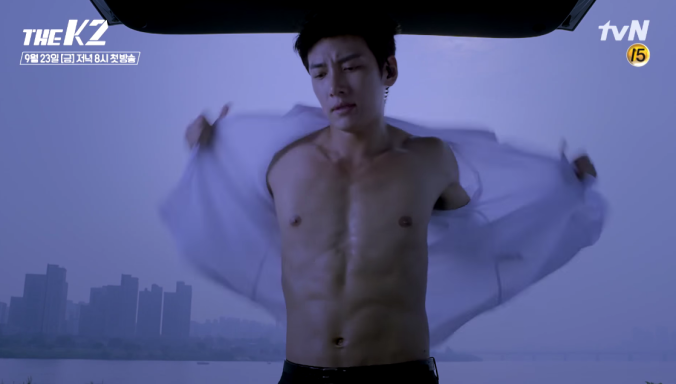 Obviously, the promotion people at TvN have studied deeply what we fangirls want to see in upcoming action drama The K2.  Is it a solid plot with a beautiful leads and lots of fight scenes?  Nope, I am pretty sure we just want a few hours staring at Ji Chang Wook’s chest.  Especially after his teaser where he spends the whole time changing his shirt.  Plot?  Who needs a plot when one has sexy abs and nipples?

Just kidding, I need more than then just pretty visuals.  But that doesn’t mean I can’t appreciate the pretty while I wait for the substance.

Kim Je-Ha (Ji Chang-Wook) is former solider for hire. He is also called K2. He is hired as a bodyguard by Choi Yoo-Jin (Song Yoon-A). Choi Yoo-Jin is the wife of a presidential candidate (Cho Seong-Ha) and the daughter from a chaebol family. Meanwhile, Ko An-Na (Yoona) is the secret daughter of the presidential hopeful. She is also a recluse.

The K2 airs on September 23rd on TvN.