Serial Killer woke up. Serial Killer has amnesia but is still as creepy as heck. Serial Killer escapes. Thank you for joining me for this week’s set up episode. 🙂 KMUSE and I have been joking around the last couple of weeks because I really am getting the setup up/filler episodes and she gets all the action, in the bedroom and in the plot. So because my episode was pretty much connecting the dots from one episode to the next we’ll quickly cover that then talk about more important things like adopting Korean Harry Potter and how annoying side characters become ones you enjoy.

Essentially, Hyun Soo wakes up and has amnesia but our team of lawyers isn’t so easily convinced. So they spend the episode trying to trigger Hyun Soo into either remembering his past or slipping up and revealing that he’s faking the memory loss. From the glimpses we get of Hyun Soo alone I don’t think he’s faking it.

Eun Hyuk and Bong Hee take the other end of the puzzle and go back to looking into Hyun Soo’s past so they can finally find out why he’s killing all these people. Both fronts catch a breakthrough at the same time. Hyun Soo sees a picture of the girl that’s been haunting him all series and he breaks down crying at seeing her. At the same time (yeah, convenient, I know) Bong Hee and Eun Hyuk have tracked down a restaurant and when they sit down the haunting music that Hyun Soo tends to whistle plays over the radio. And there are pictures the same girl at the restaurant.

Ji Wook isn’t in the room when Hyun Soo recognizes his love so he’s able to hide the fact that his memory is coming back.  Ji Wook returns after taking a call from Prosecutor Cha saying she finally got the arrest warrant and Hyun Soo asks him about his family and friends. He’s been told he doesn’t have any and Ji Wook confirms that. Then Hyun Soo asks if Ji Wook is sure that there isn’t a girl that Hyun Soo should remember. Ji Wook says no, not that he knows of.

Once Ji Wook leaves Hyun Soo devises a plan to trick one of his police guards into coming inside his bathroom and knocks him out then steals his clothes. The other officer conveniently had to use the restroom right before this. So he’s able to escape pretty easily.

Ji Wook keeps thinking about how Hyun Soo was acting when he went back into his room and pulls out the middle school year book he saw Hyun Soo reading and finds that the girl’s picture is torn out. Ji Wook rushes back into the hospital and decides the elevator is too slow so he runs up the escalator and then spots a familiar form going down the other side.

Ha! This is seriously the silliest slow-mo pause before a chase I’ve ever seen. An escalator is not a closed in space. Run! You’re making a getaway and you’ve been spotted. Don’t stare at the other person like this is the end of a rom-com and you’ve just found your lost love. Same goes for Ji Wook. Push past the people in front of you, jump over to the other side (that’s what Healer or K2 would have done) and get the bad guy. 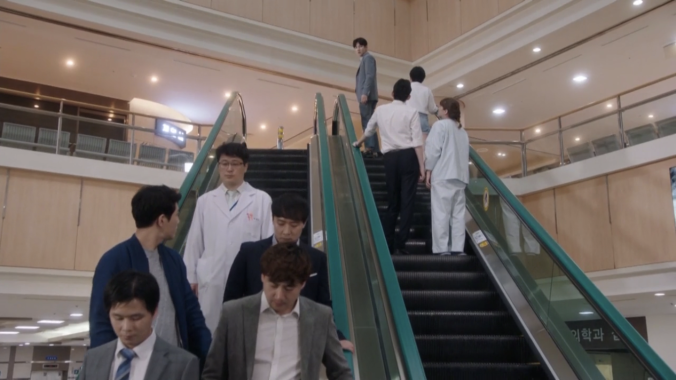 But Hyun Soo gets out of the hospital several steps before Ji Wook and is able to jump in the back of an ambulance (knocking out the paramedic?) and ride away to safety.

Okay, now to the important things.

I get KMUSE’s concerns about last week’s episode and our little guy staying with a stranger, but the lawyer team did get permission from his aunt over the phone. And I don’t think the aunt picked him up at school before, why would she start all of the sudden? He seems to be a kid who takes care of himself. So the team kind of took it upon themselves to protect the little guy when his guardians weren’t going to. You can think of Ji Wook’s home as Hogwarts.

Even after they arrest the murderer in his case, the little boy keeps popping by to see his new hero Ji Wook. The kid’s cute and he keeps triggering Ji Wook’s memories of the past which is the best thing for this show right now. It’s enough that Ji Wook asks Inspector Bang to do some more digging around his parent’s case and this time focus in on Evil Daddy Attorney General.

These two started out super annoying and I wanted to fast forward through all of their scenes but a funny thing happened a few weeks ago. They started having funny little side conversations. I enjoyed it when Prosecutor Na would call Cha out on all her pathetic behavior. Then Na got a crush on Eun Hyuk and it was kind of fun to watch. I was just as surprised and happy as KMUSE when Bong Hee ended up on Na’s doorstep and she actually took her in. (This would never happen outside of dramaland). Now I find myself thinking that if Na and Cha were both fired from being prosecutors that I wouldn’t mind if the joined the unnamed law firm. I’m also not that apposed to Eun Hyuk ending up with either of them. The scene outside their building where everyone ran into each other was the comedic highlight of the episode. The group just has great chemistry and timing. This writer also has a knack for making you feel for bad guys so I’m not surprised they managed to worm their way into my good graces.

Mostly this episode was Bong Hee getting back to work (thank goodness that work contracts trump noble idiocy) and our couple dancing around each other. The kiss at the hospital helped Ji Wook have a little hope.  Not that Bong Hee originally remembered it as more than a dream, but I think he realizes she still loves him under all the messed up sadness and drama. And with the truth slowly revealing itself in his flashbacks, I don’t think their emotional separation will last much longer. We’re heading into the last three hours of the series. Yup! I was surprised too when I realized it ends next week. This new system really messes with my sense of pacing.

I think they’ll bond together again now that Hyun Soo has escaped and will be able to work through their issues. If not, then one of them will probably get kidnapped or stabbed and then they won’t care who’s daddy did what because fear of losing a loved one usually erases things like that.

Until the next adorable kid moment (please let them bring the boy back at least one more time),