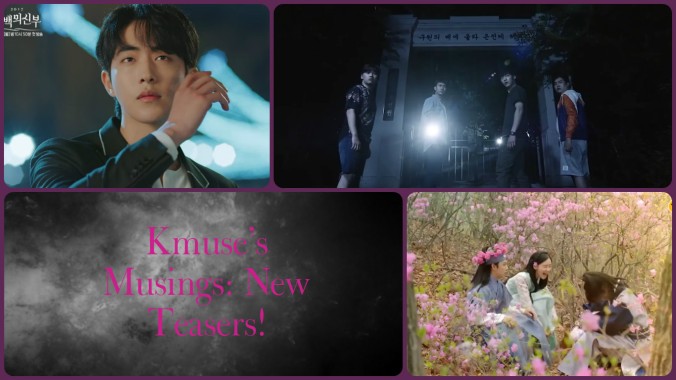 A fangirl decides to take a week off and all the sudden Dramaland decides to release a truck load of teasers.  But that is actually OK since it is perfect as the subject for this weeks Kmuse’s Musings.  So join me as I take a look at all the upcoming dramas and chat about what I like and what I hate.

**SYNOPSIS:  Won, the crown prince of Goryeo, has a pretty appearance, but he also a lust for conquest. He is best friends with Rin, who is a son from a royal family and his bodyguard. When beautiful San, the daughter of the richest man, appears in front of the two young men, the three become good friends, but things change after Won and Rin both fall in love with San.

I am so conflicted. On one hand, I have loved every role Im Siwan has ever played. Siwan is an amazing actor and I have been impatiently waiting for his return since Incomplete Life ended three years ago. Sadly, I can’t say the same for the leading lady. The number of dramas that I have enjoyed of Yoona’s can be counted on one hand, and none of those were in the past four years. So the big question is, will I like this drama? Or even, will I bother watching? I think this is one I will wait for public opinion. If I hear a lot of buzz on social media, I will probably pick it up. But it won’t be one that I am marking my calendar for.

**SYNOPSIS: Ra Eun Ho is a cheerful student who has kept her place as rank six out of 280 students at her high school. She has a talent for drawing webtoons and dreams of dating the college boy she has a crush on. One day, while trying to find inspiration for her comics, she somehow is caught in the wrong place at the wrong time and gets marked as a delinquent student. This is only the start of her troubles.

I always enjoy the School series dramas….even if the leading lady ends up with the wrong guy #TaeKwang4Ever.  That said, the teaser doesn’t really give us a lot to go on with our new cast.  It does make me want to rewatch School 2013 which remains one of my favorite bromance dramas of all time.  I think I will have to watch further teasers to really get a sense of what this drama is going to be.

**SYNOPSIS: Villagers suffer through a prolong drought. The god of water Ha Baek can allow the rain if a a young woman is sacrificed to him as his bride. For the villagers’ sake, So-A decides to become Ha Baek’s bride. She finally meets Ha Baek, but he is totally different from what she expected.

I have not been a huge fan of this casting.  The previous teasers and official posters have been very pretty but lacked chemistry.  I am not sure if this highlight trailer has changed my mind when it comes to chemistry, but the plot intrigued me enough to give it a try.  And at least for me, if there is a solid plot, I can ignore lackluster acting skills.  My only regret is that Nam Joo Hyuk doesn’t get to keep his sexy god hair.  Opportunity lost.

Save Me (Rescue Me)

**SYNOPSIS: A girl is surrounded by suspicious people and quietly whispers, “Save me!” in a dark neighborhood alleyway, and a couple of unemployed youths hear her and run to her rescue. They discover that she’s trapped in some kind of pseudo-religious cult and try to help her, but what ensues is a sequence of horrifying tension-filled events that make us wonder more about the science of the human psyche.

How can a set of gates seem so freaking creepy? I like the spooky vibe we get from the teasers and the plot seems to be right up my alley since I love a good psychological thriller. Now if only Save Me can be a solid drama. I had similar hopes for the current OCN drama Duel and, sadly, my interest crashed and burned within three episodes.

The Foreigner (Upcoming US Movie)

**SYNOPSIS: The IRA took his family. The police looked the other way. Now he must get revenge.

I know this isn’t technically an Asian drama or movie but Jackie Chan is a solid Asian link so I thought I would share with my readers.  I am interested to see Jackie Chan shift to a serious role and at least in the trailer it looks like he does an amazing job.

That concludes all the teasers for upcoming kdramas.  I know there are a few Chinese dramas that I have not commented on, but I still am playing catchup so I might do a post on them independently when I get some time.

As always, be sure to let me know which ones you plan to check out in the comments and be sure to check back for more posts discussing all the current kdrama buzz.

0 thoughts on “Kmuse’s Musings: A New Batch of Teasers”