ACK!  I am a lot more excited to see this drama now that a full trailer of Song Joong Ki awesomeness has been released.  There is just something about that man (probably the voice, the sexy look, the uniform) that totally hits all my fangirl buttons.

A love story between Captain Yoo Shi-Jin, who belongs to the UN peacekeeping troops, and Doctor Kang Mo-Yeon. Due to the UN’s request, they are stationed in the capital of another the country. 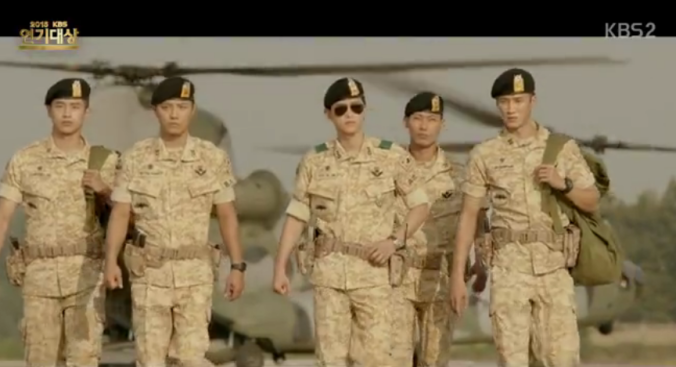 I do have a few concerns, however.  The first is, Song Hye-Kyo, who is an actress who occasionally come across a little one note (aka blank).  That is not to say she is guaranteed horrible, just that she really needs to click with a director to shine.  I am hoping that the director, who has previously filmed Secret Love & School 2013, will have that ability.

My other concern is the writer’s ability to create foreigners that are not extremely annoying.  Keep in mind that this is Kim Eun-Sook who also penned the drama Heirs.  A drama which contained some of the most annoying foreign characters EVER.  And this whole drama is set in a foreign country so we can’t even say  this segment is going to end soon.  Things could get dicey pretty quick.

But at the end of the day, it is Song Joong Ki we are talking about.  I have waited over three years for his comeback so this drama is going to be watched regardless of its crap level.   Descendants of the Sun is set to air in February so check out the trailer below and tell me what you think.  Will you be joining us in this drama journey which is filled with potential plot bombs?

0 thoughts on “Trailer Pros & Cons: “Descendants of the Sun””