It’s Captain Yeon Joo to the rescue!!!  Again. She is the only person left that can save both her father and her husband. Oh, yeah, and probably the fabric of reality too. When the bad guy is in control of the world you live in, what do you do? You lock up the instrument of his destruction.

Since she the hero of the hour, lets focus on her and what she goes through in this episode.

Yeon Joo kisses Kang Chul and ends up back at the hospital. I want to put forth a suggestion at this point. Yeon Joo needs to keep on her person at all times, even when she’s sleeping, a huge wad of cash and maybe a packet of ramyun.

She has very little time to save Kang Chul so she grabs all the needed medical supplies and rushes to her dad’s studio. Only to scared out of her ever-loving-mind when she sees Faceless Dad. She runs out of the house yelling her head off.

That’s right when Soo Bong gets the hospital looking for her. She calls him and they have this total freak out scream fest over the phone. OMG, I think I need to rewind and watch Soo Bong one more time. I love this actor and this is my favorite character of his. (It helps to erase him in Remember, gag.)

Soo Bong tells her to lock the door and just run from Faceless Dad and he’s going to do the same. He pushes the two doctors into their office and closes the door, them looking at him like he’s insane. Yeon Joo doesn’t have the luxury of running for her life, she has to save Kang Chul. She puts on her superhero pants (the only pants she’s warn all week because of being stuck in W world.) and tries to steal the drawing tablet, but Faceless Dad wakes up and tries to stop her. 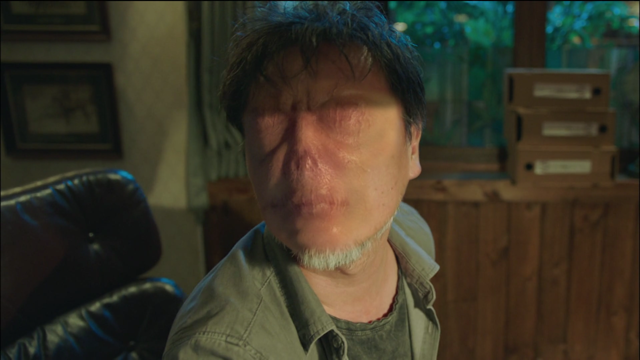 They wrestle and we don’t see the result right away, just hear them fighting.  But our superwoman is not going to let a faceless dad stand in the way of saving her man. She locks him out of the office and sets to drawing those medical supplies into Kang Chul’s room. Then she erases the door to his hotel room so that the police can’t find him. (And possibly lock him in there to wither and die from hunger. LOL) Yeon Joo also paints his car and changes the license plate number.

She’s hurrying as fast as she can. Trying to make sure Kang Chul has everything he needs to save himself and hide from the cops.

Seriously, this guy is the scariest thing EVER! He tries to choke Yeon Joo and they struggle but she’s able to unplug the drawing tablet and plops Killer Dad firmly back into his world. Faceless Dad also drops to the ground like a discarded puppet. He won’t wake up so Yeon Joo just lays him in her bed and locks him in the room. She’s screwed now because if she turns the tablet back on then Killer Dad will get her. 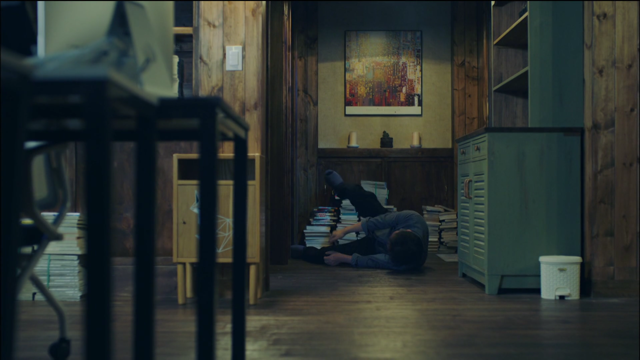 Soo Bong brings the doctor guy… I have no idea what his name is. Sorry, right now he is totally Chun Sang, half of the geeky duo that I love almost as much or maybe even more than our OTP on Let’s Fight Ghost. Anyway, Soo Bong brings him for moral support. Except they’ve never met before and the hand holding is a little much for him. I really couldn’t help picturing what Chun Sang would do in this situation.

Soo Bong goes into to talk to Yeon Joo and she explains everything that happened but before she can even greet her colleague she disappears.

This is where I started to shake in my boots a little. Okay, I’ve been shaking since Faceless Dad showed up. Anyway, it seems that Kang Chul isn’t the only one who can summon Yeon Joo. It appears that Han Chul Ho, the evil prosecutor, is trying to find her and she is summoned to his freaking office. Poor thing, she just snuck around the hospital starving for four days, now she has to escape his office without being noticed. Yeon Joo doesn’t do a good job and he sees her, but she’s quick enough to get away from the guards and out of the building.

Yeon Joo heads straight for a convenience store and finds out it’s the same day she left Kang Chul, just 2 hours later and Kang Chul is still at large. She leaves and tries to get a taxi but then time zooms past her. It’s suddenly daytime and her wounded lip is healed. Yeon Joo runs back into the convenience store and finds out that it’s exactly one month later and Kang Chul was never found.

Yeon Joo goes to hotel where she hid him away and finds the room still closed off, and no one answering on the other side. You can’t blame her for fearing the worst. She kind of Cask of Amontillado’d him in that room. She goes to the only place she knows to, and visits Do Yoon. At first he acts like he is as clueless as the police, but after Yeon Joo breaks down crying in front of him, he finally hands over a location to meet Kang Chul.

She rides the bus, and waits for what seems like hours before her white knight shows up. Or the man whose life she’s saved 4 or 5 times. She’s relieved to see that he’s alive and we find out in flashback that she left him detailed instructions so Kang Chul could take the bullet out himself and patch his wound up. Then he rested in his tomb of a hotel room. Thankfully, since Yeon Joo left the door drawn in on his side, Kang Chul was able to leave but the door disappeared as soon as he excited. He’d left in his newly painted car and found a place to hide out.

Kang Chul banters with her about saving his life, and leaving him behind. She just sits in her seat, dazed. (And probably hungry again. If her lip healed, then her body probably digested that ramyun weeks ago, and she is now running on nothing.) 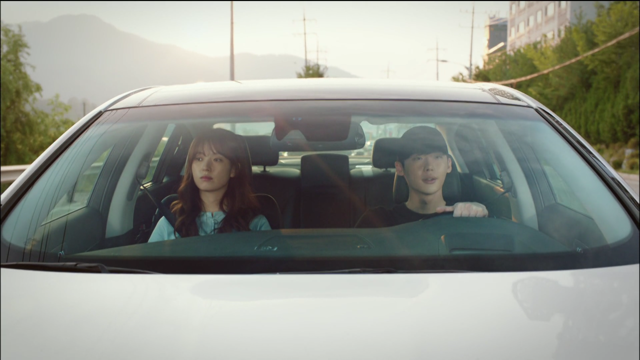 He takes her to get new clothes. Since she’s in the same ones she was the last time he saw her.Kang Chul buys Yeon Joo a cheap dress and then some ice cream. He really is acting strange for a fugitive on the run. But he says that he’s found no solution to his problem, and the only reason he hasn’t turned himself in is because he’s been waiting for her. She told him that she’d come back with an answer to their problems.

They go to his place and he gives her things to shower with. This girl probably stinks! And says he’ll make dinner. She off handily mentions that he can’t cook, and he asks her how she knows. She rambles some answer and turns to go take that much need shower. But before she gets to it, she hears Kang Chul tick off how many items he’s accomplished on his homework list.

Yeon Joo spins around and asks how he would know about that. Turns out he really has been doing homework. A doctor at the hospital found the W book she had with her when she came to the manhwa world last time. He’d given it to Do Yoon and he passed it along to Kang Chul because it had Yeon Joo as a character in it.

At first Kang Chul read it thinking it was just nonsense (as one would do in the real world) but the more he read the more he started thinking things were weird. The clincher seems to be the picture of him floating deep in the water. It’s something he’s dreamed about since the reset happened.

Kang Chul asks, “So what happened next? Did he lose all his memories? Is that how you lost your husband? Is the husband you lost… me?”

Yay! Kang Chul knows what happened between him and Yeon Joo. No, it isn’t the same as having your own memories of events, but you can tell he already feels that same spark of affection for her. And this had to happen for him to know how to make his next move.

He’s starting to flicker and fade physically, which means they have to hurry or he’s going to be written out of his own story. And they have to figure out how to get Faceless Dad his free will back, oh and his face.

It’s a scary thing that Killer Dad and the prosecutor can both summon Yeon Joo now. She’s not safe in the W world or her own until they put a stop to the bad guys and gain control of the narrative again. Even with the power cut to the drawing tablet she was still pulled in, so I don’t think destroying it will work either.

But they have to think of something fast because I’m not sure Yeon Joo’s body can take much more. I’m scared that she’s going to collapse at any moment. She just skipped a month with zero sleep or food and that was right after she’d gone four days with only eating ramyun.

I really want Team W to happen. Soo Hee and Soo Bong, Do Yoon and our OTP. Can’t they all cross into the real world and figure out a way to save both universes?

We have 5 episodes left and with this writer I’m guessing anything can happen at this point. Who knows, maybe Killer Dad will pop out of my screen and steal my face next.

If you have any end game theories, I’d love to hear them. But until then…