Episode 3 continues to dole out the awesome bromance as well as a hefty dose of detective work as our double dragons delve deeper into the mystery of who killed their Sensai.  But twenty-year-old mysteries are hard enough to solve without all of their leads ending up dead.

What would Ouroboros be without our weekly serial killer?  Anyone else kind of get the impression that Japan has a crazy amount of killers within its midst?  I just read a report that two of the safest cities in the world are in Japan and all I can say is “the internet lies”!  If my dramas are anything to go by, the reality is that I have a 50/50 chance of being murdered.  With the other 50 percent being an off chance meeting with a quirky hot detective & or gangster.  Hmmm… if the gangster is Oguri Shun, I might just take those odds.

This week we get a killer that is going about murdering homeless men with a limp.  It is such a huge case that the police develop a special task force to deal with the issue.  A task force in which our department 2 is assigned the grunt work of digging through the homeless victim’s personal belongings. But Ikuo has more important things to do, such as glance at all the higher up’s wristwatches as he hunts for the people sporting the elusive gold timepiece. 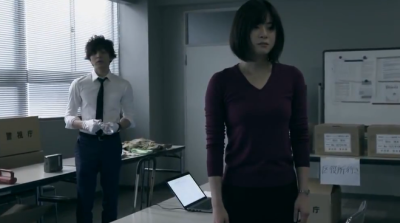 Tatsuya is also very busy. Very busy being super paranoid that the big bad organization will attempt to kill him for his inquiries into their business (If my PI informant had been murdered just looking into the old murder case, I might be  a bit paranoid as well). Tatsuya refuses the tea brought to him by his underlings, instead opting for the prepackaged kind.  He even goes the extra mile by having his #1 act as a taste tester.  You know, just to make sure that the bought kind was not also poisoned.

Hibino gets tired of looking through homeless trash while everyone else gets to do the real detective work and decides to go all rebellious and do some sleuthing of her own (with Ikuo as backup).  They go undercover in the park as the most unrealistic lovers of all time.  Let’s just say this picture speaks a thousand words, and someone really needs to teach these two how real people make out on a park bench. 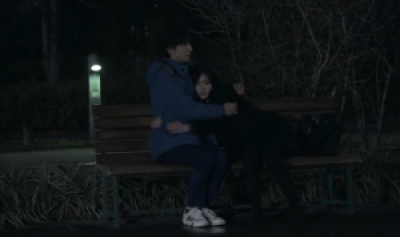 While they are waiting, Ikuo comments that something seems off about the crime scene photos.  In the first two murders, the clothes (heavy coats and sweaters) had been removed.  The third was different in that the victim was still completely clothed when he was found.  Before they are able to work through that train of thought they hear a commotion.

Ikuo and Hibini catch the killer in the act as he attempted to bludgeon another homeless man while yelling “It was all his fault”.  Hibino takes the perp down while Ikuo checks with the almost victim.  But when Ikuo turns his back for a second while calling for backup, the attacked homeless man disappears.

Turns out the bad guy had killed the homeless man because he was stressed from exams…….seems valid for an Asian drama.  The school experience there must really suck.   Ikuo asks if the man had mentioned anything about removing their clothes but was blown off by division one cops as that line of questioning being inconsequential.  Ikuo and Hibini continue to push their theory that maybe there were really two killers and not just the one, but in true jerk detective fashion, the junior detectives are ignored.

Suspecting there might be more to the original story of the four killers, Tatsuya goes back to the black market doctor and inquires as to why the doctor remembered these people so easily after 20 years.  He throws a huge envelope of money in front of the doctor to help refresh his memories.  It turns out that there was more to the story.  Black Market Doc tells him how ten years ago the three that had not been wounded came asking for the medical records of the 4th, saying he had gone into hiding.  A few years after that the 4th (injured) man came asking for Doc’s help.  It looked like he was homeless, and he brought another injured homeless man with him asking for medical help.  Hmmm, taking a wild guess that the 4th killer is sitting, drinking by a fire with Ikuo, and spilling his guts about his guilt filled life.

In case you are wondering why Ikuo came to be hanging out with one of his Sensai’s killers, let’s jump plot threads real fast. Being the sweet guy he is, Ikuo hunts down the injured homeless man to check on his injuries.  He brings the down and out soul some warm drinks, inquires as to whether he is OK and pesters him with unwanted first aid.  It is lucky that Ikuo is there since he was right about there being more than one killer. And that killer is currently trying to murder our crippled homeless person.  Mystery Killer comes out of the shadows and says, “Found you.. Your Yuasa right?”  The assailant holds up a photo of a back wound which makes Homeless guy blanch, then he attacks with a baton. Before Mystery Killer was able to send Homeless Guy to the pearly white gates in the sky, Ikuo jumps into the fray and fights him off.  I would just like to take a moment and mention how amazing all the fight scenes are in this drama.  It is impossible to express in a screencap how dynamic the action is. 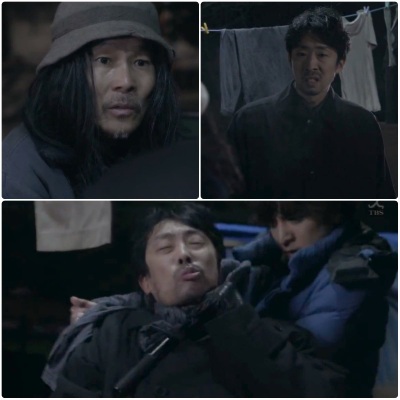 It is always my favorite moment of the episode when either of our Ouroboros goes all alpha fighter.  Unfortunately for Ikuo, Hibino rushes up behind him and while he was distracted by her arrival, the bad guy pulls out a gun and shoots her.  Ikuo rushes to her side, pushing his partner out of harms way, but Hibino ends up grazed by a bullet regardless.  In the confusion the killer and the homeless man escape. 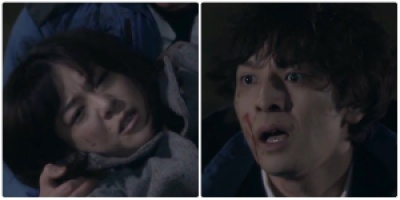 Has anyone else noticed that Ikuo’s goofy guy facade has been breaking more and more often as the drama progresses?  It completely shatters when Ikuo finds out that the police are trying to cover up the homeless murders and pin the blame on the angsty rich kid who murdered the third victim (seriously, so many killers in this drama).  He gets right up into the lead detective’s face, shouting about how coverups can never be forgiven.  Watching on the sidelines with his eagle eyes, is smirky cop.  I am sure that his radar is pinging like crazy over this obvious break in character. 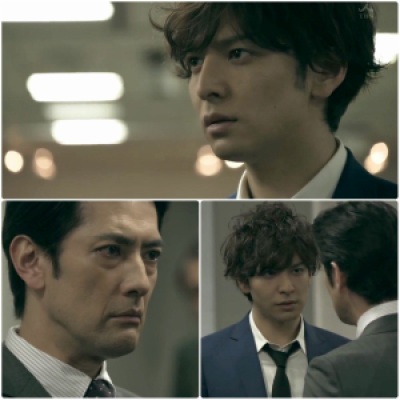 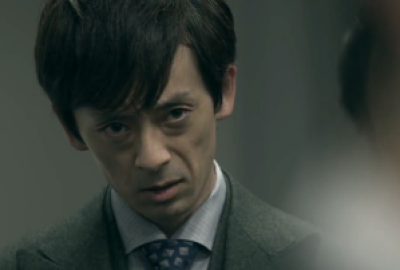 We learn a little more about our mystery killer after Hibino claims she had recognized him.  Turns out he was once a talented detective (nicknamed the Yakuza Killer) that focused on taking down the Yakuza (Japanese Mafia). So talented in fact that he succeeded in putting away a head boss.  But his work success leads to personal disaster as Yakuza members targeted his family, killing his wife and putting his son into a coma.  He left the force bitter and was soon broke because of the ongoing hospital fees connected to his son’s condition.  From now on we will be referring to him as the Yakuza Killer which just sounds better now that his identity is no longer a mystery.

Ikuo goes to a public locker and takes out a GPS tracker as well as a gun, hiding it within his coat.  Little does he know that smirky cop is tailing him, again trying to figure out what Ikuo is hiding.  Or does he?  Ikuo is slick on losing his shadow and is again free to go vigilanteing. There is something so enjoyable about watching these two match wits.  Surprisingly, I am really enjoying smirky cop as an adversary. 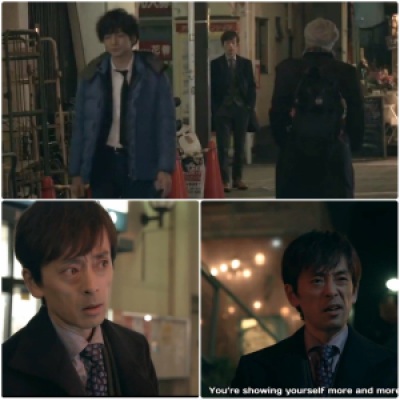 Tatsuya is first to find our runaway homeless man, but just as he is about to start interrogating him, Yakuza Killer arrives at the scene.  A shootout begins and Tatsuya is hit by a bullet in the side. Luckily, he remains functioning and drags the homeless man into a nearby warehouse in an attempt to escape the hired killer.  They continue to run upwards until finally a bleeding Tatsuya (still sexy even bleeding out) shoves the homeless guy in one direction and leads Yakuza Killer in the other.  Cornered against a large window, Tatsuya faces down the ex-cop who mocks him for being so stupid and getting in the way.  Yakuza Killer brings up his gun but is stopped when Tatsuya smirks and tells YK that he lured him her for a reason.  He shifts to the side and we see Ikuo holding a gun behind him at the window.  Ikuo shoots YK and enters through the broken glass, “I made it in time”. Tatsuya jumps off the ledge and says “Bad for you Kujo (Yakuza killer) the two dragons have arrived.” Okay, I’ll admit that a loud “Squeeeeeeee!!!!!!”  might have been uttered at this point.

Our awesome vigilante duo begins kicking some serial killer booty and look so amazingly good while doing it. This series of action scenes are epic as Ikuo and Tatsuya double team the killer.  As if they are of one mind, our vigilantes work in tandem, taking him down.  I love the directing so much in this drama.  The Yakuza Killer is down for the count and all that needs to be done is that last bullet to take him out.  Unfortunately, when push comes to shove Ikuo falters at pulling the trigger, at least for a second.  That second was all that was needed for an unknown sniper to kill our Yakuza Killer.

Ikuo and Tatsuya realize that they have lost the homeless man yet again (He sure is a sneaky survivor). The poor guy is hobbling down the street, searching for some help for the two men (Ikuo and Tatsuya).  He hails a cop on a bicycle and as he turns to point where the fight is happening we witness him shot down by the very cop he was trying to seek help from, eliminating him as a source of information.

Seeing the homeless man faced down in the rain, shot and bleeding out, triggers Ikuo’s memory and he shouts out: “The one who shot this man twenty years ago was Yuiko Sensai.”

Young Ikuo comes down into the kitchen just as Yuiko Sensai dials the police on the phone.  Instead of speaking to the operator, she puts the phone (still connected) down at the center.  She then orders Ikuo to go back upstairs as she pulls out a gun.  As Sensai places her necklace in the spot where the gun was, she tells Ikuo to tell Tatsuya and the others that no matter what happens they need to live strongly.  She hugs young Ikuo and rushes out the door. 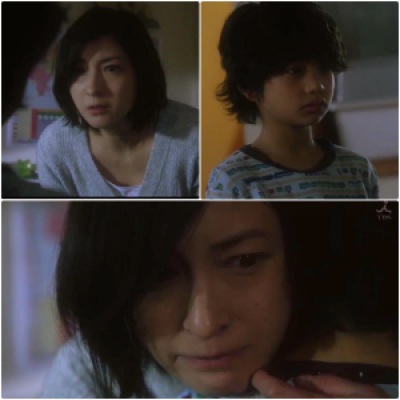 The plot continues to thicken, and as things become more complicated, the lines of their revenge begin to blur just a tiny bit.  It is never more obvious than when we see Ikuo who is slowly starting to crack.  Not only is Ikuo’s anger and disillusionment spreading into his work, but his eagerness for revenge is slowly shifting as well.  He is starting to see the humanity behind the bad guys which make it a lot harder to pull that trigger.  Also now that we know that Sensai was not the simple victim as originally assumed, will this change how our dragons will feel about the revenge plot? 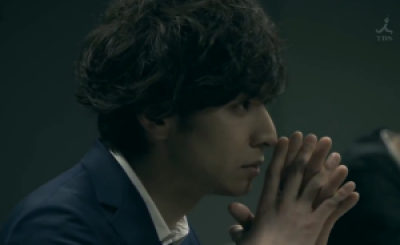 Check out our Facebook page or follow us on Twitter (@amberkmuse) for info on all our newest recaps, posts, and to join in our kdrama discussions. https://www.facebook.com/pages/The-crazy-ahjummas/336988683021748?fref=ts