This episode was very emotionally satisfying.  I know that there will be a lot of people that wanted romances and a perfect ending, wrapped with a bow and feel the show didn’t deliver.  I am from the other standpoint that for only being three episodes we got a perfect ending that left me happy.  And sure I want to see more of their story and hope for bromance and romance to occur.  But if I can’t have that, I will be happy with emotionally stable and happy.

Before we get to our three leads and their story, lets chat about the random moments that stood out in this episode. 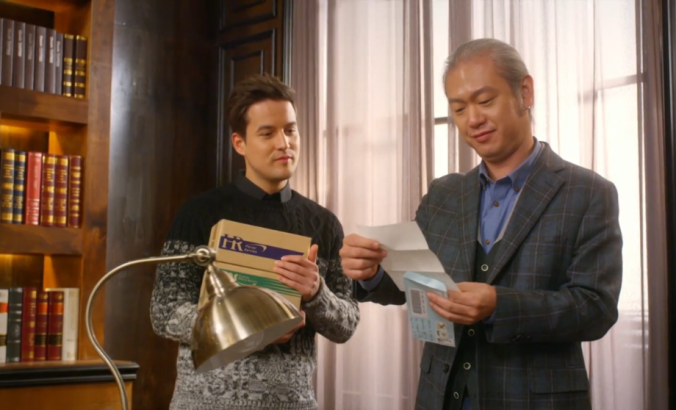 Does anyone else find it odd that the whole father/son pen pal situation is all happy with no initial drama? This is the most angst-free birth secret ever.  Guess it is the good part of having only three episodes.  There is not enough time for a long drawn-out reveal.

***I was totally wrong.  But more on that later.

I love these two’s interaction.  She is so prickly and Cha Shik is just so himself.  It just makes me happy to see him trying to get her approval.  One of my favorite moments is when Cha Shik has come to snag Soo Yeol in the middle of the night and he is caught by her mother (who already knows what is going on and is just happy she is playing the piano again.)

When Cha Shik inquires whether he is looking less like a loan shark goon, mom promptly replies that yes he looks different.  Now he resembles a cat burglar about to jump the fence.  Hahahaha.  I hope that Cha Shik and Yoo Seol end up as a couple simply because I want Cha Shik and her mom to be together forever.

Jin Mook’s internal dilemma of whether he is going to continue with piano or give it up for a regular education was beautifully executed. I could really feel the despair as well as see his father’s point of view, even if I did think he came across as a total jerk.

It was also well resolved when Jin Mook decided that even if he does end up being only a piano teacher, he will be happy since he will be doing what he loves.  Jin Mook was strong, direct, and confident in his decision.  Something that his father seemed to accept rather than the whining and tantrums of the past.

Yoo Seol as a Teacher

Now that we have chatted about the other characters, let’s get back to our leads and their attempt to compete in the competition.  Upon seeing how far Cha Shik had come in just a while of practicing (something I still marvel at) Yoo Seol agrees to be his partner.  Yoo Seol declares that this will determine whether she continues on with piano.  If they fail she will be truly done.  Eeek.  Pressure.

It is at this point that Yoo Seol turns from friend to teacher from hell.  I love how she tells Cha Shik, “I am not going to put a lot of effort in, just teach you haphazardly.” and then turns into a piano drill sergeant that would make her mom proud   I cracked up when Cha Shik’s voice-over started, “Yoo Seol’s haphazard is very scary.”

Yoo Seol is such an aggressive teacher that finally Cha Shik’s temper explodes and he stomps away in a huff.  Of course, his anger quickly subsides, and Cha Shik comes back to beg forgiveness.  Cha Shik is hilarious as his apology involves altering his voice with helium balloons and singing her pop songs.  Aw, I love this character.

This scene was so beautiful I just wanted to screen cap every second.  So please bear with me and look at all the pretty. 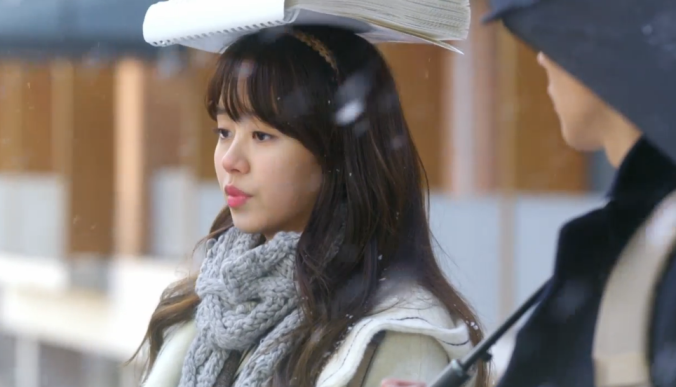 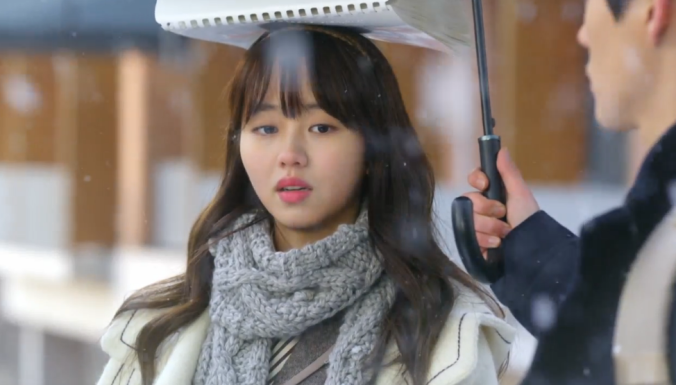 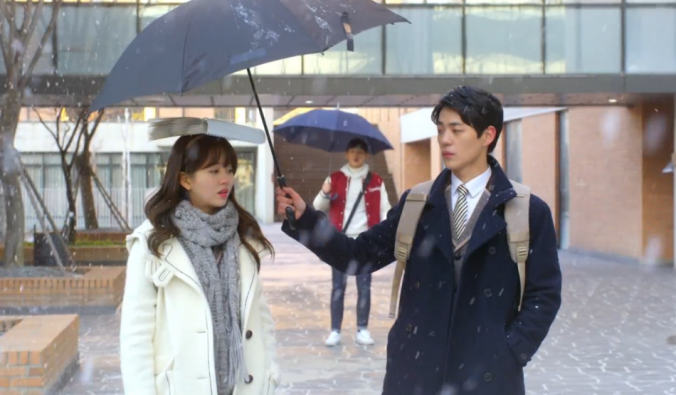 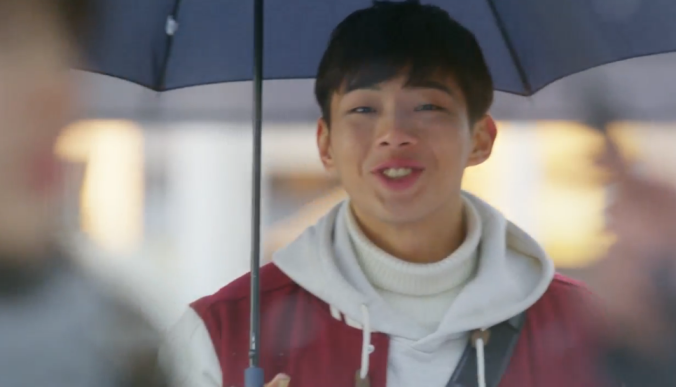 Jin Mook halfheartedly worries/nags Yoo Seon about being embarrassed performing with Cha Shik.  Yoo Seon, being how she is, promptly stands up and says that Cha Shik is brilliant and won’t be losing the bet.  Cha Shik overhears the two talking and lights up at her words.  But after they walk away and are alone, Yoo Seon goes all thug and demands that he better not humiliate her.  Poor thing is secretly terrified of the performance falling apart.  Cha Shik sweetly guarantees that he  won’t ever let her be humiliated.  It is so adorable, yet I see that the stress continues to rise in Cha Shik as he attempts to do the unattainable and get this complicated piece perfect in just the short time allotted.

The pressure from having to get an especially fast part of the piano piece up to speed finally cracks Cha Shik’s confidence and he pretty much falls apart.  Even going to the extent of begging for some help from Jin Mook.  Either that or Jin Mook needs to really piss Cha Shik off since that always motivates his ability to accomplish the impossible.

When Cha Shik realizes that no matter how hard he tries, he can’t play the hardest part up to par, he goes to confess his failure to Soo Yeon.  Soo Yeon sits in their practice room and you can read the fear on her face that Cha Shik is going to quit.  Remember, if they don’t succeed, she also plans to give up on piano.

Just as he is going to confess his failure, Jin Mook quietly steps in and shakes his head.  He realizes how important this is and takes Cha Shik’s place on the piano and plays the part perfectly.  I totally teared up when Soo Yeon compliments the performance telling Jin Mook that he should never give up playing the piano.  Sure, she thought she was telling Cha Shik, but it was just what Jin Mook needed to hear.  When Cha Shik put his hand on Jin Mook’s shoulder in support and then had Soo Yeon repeat the compliment, I totally sobbed.  Such a great moment for all three of our leads.

But now our hero is at a crossroads.  On one hand Cha Shik doesn’t want to let Soo Yeon down. Nor does he want to disappoint his dad who flew to Korea to judge the competition.  Only, it turns out that his dad isn’t really his dad.  Cha Shik’s mom totally lied and the truth comes out.

Always thinking of others before himself, Cha Shik gets official approval to switch spots with Jin Mook.  Unknown to Soo Yeon, Jin Mook will now be her partner.  This allows her to have the best chance at succeeding in her dream of playing piano again.  Then Cha Shik goes away to fall apart.

Cha Shik yells at his mother for lying to him and giving him false ideas that he is a genius. How could she do that?  Does she even understand the embarrassing things Cha Shik did because he thought he was a prodigy like his father?

Cha Shik’s verbal rampage is stopped short when his mother asks why he went to the hospital rooftop after he found out he couldn’t pole vault anymore?  We get a flashback of Cha Shik contemplating suicide and collapsing in tears after he couldn’t go through with it.  Of course, she was going to do anything to get him out of that state of mind.  It was not like she could have said he took after her, a ghost writer with nothing to show.

This is just the thing Cha Shik needed to make him so angry he could achieve the impossible.  He drags his mother to the street piano and tells her to see what her son can do.  The son that takes after his mother.  He begins playing the song and we watch as all three leads play in unison, achieving their dreams together.  Sure, Cha Shik is not on the stage with the other two but it doesn’t matter because they are all perfectly in sync.  Each playing with a confidence, determination, and happiness that they had not previously had in episode 1.

I liked the ending.  We see that Jin Mook and Yoo Seon go on to win the whole competition.  I especially thought the helicopter mom dusting the photo of her daughter smiling was well done.  The mom also grew as a parent and a human being throughout the short show. Most importantly, we see Cha Shik’s house where his mother is busy writing her own work and a piano in the corner, covered with music sheets and a finger exerciser.  I love that he sticks with the piano, because he truly is gifted, and goes on to further his talent.

I can understand why people would want more in a way of a conclusion.  I also hate to say goodbye.  But the reality is there were only three episodes and the writer needed to decide what they were going to focus on.  Personally, I think they chose well.  We came into the lives of the characters when things went wrong and their future plans shifted.  They come to a forked road in their lives you could say.

The three people who were in pain, filling the needs in each other, became better versions of themselves throughout the process.  It was about their trials and journey in reference to music that was the focus and how it shaped their lives.  Not outside influences like romance or the future.  We got a glimpse into this period in their lives and I felt it was a complete glimpse and I am satisfied with that.

Thanks for joining me on this short, but sweet, recap.  Be sure to check out the Special Giveaway  we have going on, for the chance to win a copy of the hit movie Veteran.