Just when I think I can’t become more charmed by our adorable OTP (One True Pairing), they prove me wrong and I reach a new level of shipping happiness.  So join me as I discuss episode 8 and all the things that make this episode (and the whole drama) so engaging.

A good side character is a must

Let’s first talk about all the wonderful side characters before I start waxing poetic about our main couple.  It wouldn’t be as rich a story without them and there are several things I have not talked about due to OTP (One True Pairing) shipping.  So I think now is as good a time as any to give them a shout-out and share some great moments from this episode.

Joong Won – Imagine my surprise when we have a second lead who is aware of his interest in the leading lady, but steps back once he sees the main couple so happy.  Do you know how rare that is?  Almost as rare as having a drama where I don’t hate any of the characters.  Truly one in a million. Rather than interfere romantically, Joong Won has become a grumpy uncle figure to our two puppies.  He fusses over their problems and makes sure that Louie doesn’t get too self-absorbed to the point of causing Bok Sil problems.  He even goes to the point of hiring Louie as a part-timer to help with some moving of office merchandise for the day…… with hilarious results.

Not wanting to look like a shmuck at the workplace, Louie rushes back home and borrows a whole outfit from Joong Won and shows up to work looking more like the owner of the store and not like a part-time employee.  He even casually orders one of the staff to make him his favorite coffee while he waits for Joong Won and Bok Sil.  Can I just say that I adore how everyone caters to Louie’s whims?  It’s a good thing Louie isn’t evil because he could take over the world with his charisma.

The Gold Line Staff – While not the most entertaining individually, this group as a whole does a great job of providing entertaining workplace commentary.  This is so much better than having to watch greedy men go about plotting. They also discovered Louie’s shopping skills as he chooses the best options for promotion while doing his part-time work.  He even leaves them all a personal review of their likability as co-workers, complete with a star system.  This scene just had me smiling because it is classic Louie.

Ma Ri – It is hard to hate such an inefficient bad guy who isn’t really that evil.  Ma Ri is more of a brat who is easily manipulated because of entitlement issues.  I laughed whenever Ma Ri was on screen trying to avoid Louie, all while attempting to manipulate Bok Sil.  She and her father are just so inept it is hard to take them seriously.

To be honest, if we didn’t suspect the uncle was behind Louie’s “death” and the death of whoever was driving the car, I would not mind them just getting an eventual slap on the wrist.

Downstairs Ahjumma & Hyung – Every episode I find myself liking these two characters more and more.  They might be loud and cranky but, when the chips are down, they really step up to help a neighbor out.  I especially thought it was adorable when the two guys laid their heads in Ahjumma’s lap and fought over her maternal affection.

Butler OTP – These two need to hook up ASAP.  They are equally co-dependent on their employers and I could totally see them having a bundle of little future butler babies.  Besides, who else are they going to find who understands the 24/7 needs of Louie and Grandma? 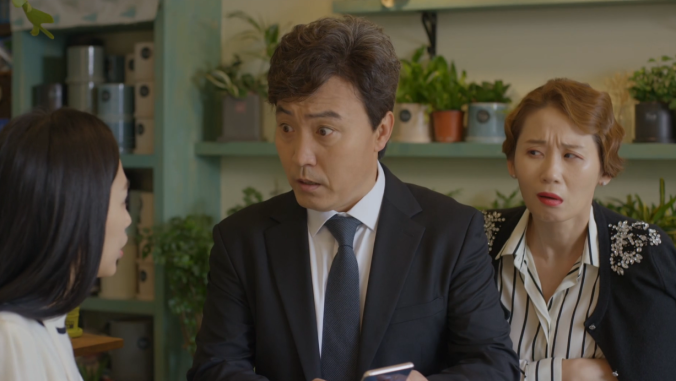 Hot Cop – There isn’t really a ton of purpose to his character, but lord is he a sexy. 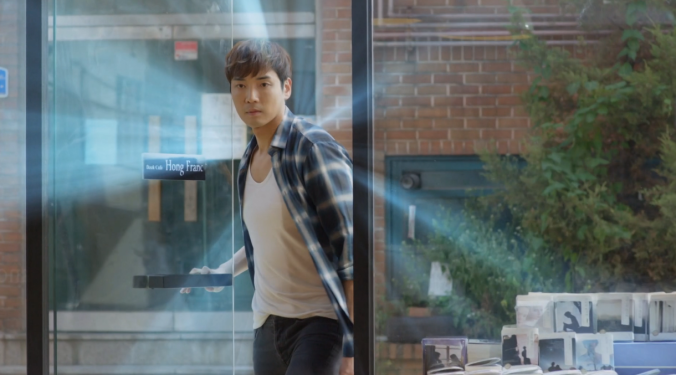 The evolution of Louie

This episode we are watching character growth in action as Louie decides he wants to be more than a stay at home man-child.  WOOT!  Not that I didn’t enjoy incompetent Louie, but Louie with ambition is even better.

Louie carried Bok Sil’s bags when they moved back to the rooftop apartment, bought snacks for all his family (including Joong Won) with the money he earned as a part-timer, and even declared he wants to open an online shopping mall since he thinks he would be good at that.  Ha.  So many things are coming out flowers and sausages for Louie despite his lack of financial comfort.  Makes a viewer proud that our little bias has grown up.

Now that he has some money of his own, Louie has decided to treat Bok Sil to a day of doing whatever she desires. Bok Sil promptly declares that she wants to see the sea which brings us to one of the most natural and adorable couple moments I have ever watched in a Kdrama. 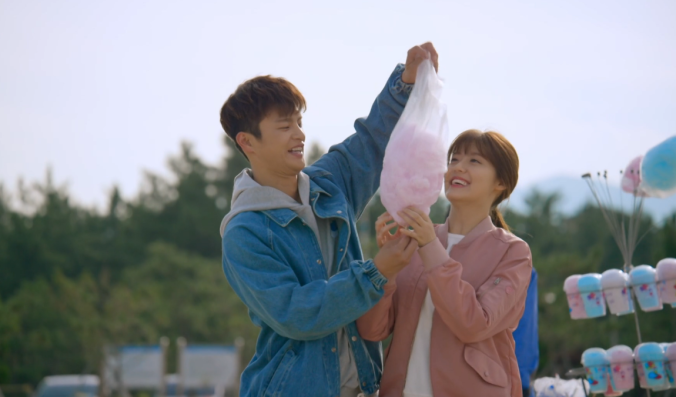 A beach cart selling cotton candy has a small radio blasting the American song “Be my Baby” out onto the empty beach.  Louie and Bok Sil promptly begin dancing to the tune while munching on cotton candy.  It might just be one of the sweetest moments I have ever seen in K-land.

But wait, then they dash into the ocean (that looks hella-cold) and have an impromptu water fight.  When Bok Sil loses one of her shoes in the waves, Louie goes after it.  Only to toss it farther into the ocean when he finds out it was a present from Joong Won.  Hahahaha. An action that costs him the price of a new pair of shoes and a piggyback ride for Bok Sil. Gah!  I can’t stand how perfect these two are for each other.

So often we enjoy OTPs in various dramas, but it is rare that one feels so natural that you forget you are watching a TV show.  Both actors are 100% immersed in their roles, and I would be hard pressed to imagine them with anyone else at this point.

The language of love

I have been wondering how everyone just dismisses Louie’s ability to know so much random information about high-end items for weeks now.  Finally, there is something that you can’t dismiss as random common knowledge.  Upon passing a foreign book store, Louie stops and starts reading a book in Japanese, then German, Spanish, and finally French.  Needless to say, this is not only cool but highly indicative of Louie’s higher class upbringing.

While taping his newfound talent (I am sure he wants to send it to Joong Won in a virtual look-what-I-can-do text.) Bok Sil asks Louie what his best moments have been since losing his memory.  Louie reflects back to all his remaining memories and answers that the best times were when he was waiting for her.  Awwww.

Slowly, Louie leans in and gives Bok Sil one of the sweetest kisses.  Finally, our cute couple is officially a couple.

I really enjoy watching this drama.  It never turns out like I was expecting while not totally throwing out the tried and true Kdrama tropes.  For example, how Joong Won has feelings for Bok Sil but takes a step back out of respect for the relationship she is already in.  It has all the basic Kdrama setup without the angsty anger at the 2nd lead’s dense need to win the girl.  Things like this give Shopping King Louie a fresh feel without feeling like we are trying to think outside the box.

I admit that the lack of overwhelming makjang angst is appreciated and, judging from the quick increase in ratings, the Korean audience is agreeing with me.  I just hope that we can keep this pacing through the next three weeks.  It would be tragic if we went through all this time with great character development, only to lose it in the final stretch.

0 thoughts on “Shopping King Louie Episode 8 – Be My Baby”