We are off to a wonderful start as While You Were Sleeping provides everything I love in a drama. Witty banter, heartfelt angsty backstory, with just a dose of romance, all combined to make the first episodes immensely enjoyable.

Lee Jong Suk is back and paired for the third time with screenwriter Park Hye Ryun. With Pinnochio and I Hear Your Voice ranking as some of my all-time favorite dramas, there was no way I was going to skip this one. So here I am, once again, committing to a recapping project.

For those of you just discovering our awesome blog, I am Kmuse, one of the main bloggers at Dramas with a Side of Kimchi. I will be bringing you my opinions on all of the odd episodes, while Karie will be chatting with you on the even episodes. A little about me: I am a mother of three and an avid kdrama watcher.  I love to watch literally everything. There are very few currently airing dramas that I am not watching, so if you have any questions about them (or really any drama since I have seen an insane amount) feel free to ask me in the comments. Or better yet come follow our facebook page and ask me there. For those of you who have not read my past recaps, I am one of those bloggers that really like to just discuss my opinions on certain scenes or concepts of the drama. I don’t go step by step through the whole thing. So if you are looking for a complete recap you might have to look elsewhere (and then come back and read ours of course).

For those of you who have watched the writer’s past dramas, you will know that they contain a little element of fantasy interwoven with the plot. While You Were Sleeping is no exception. Enter our heroine Nam Hong Ju (Suzy) who sees visions of the future in her dreams. We open with Hong Ju dreaming that she is stepping into the embrace of an unknown and sexy (sorry, I am a huge Lee Jong Suk fan so there will be fangirl elements in my descriptions involving him) stranger. They hug underneath the atmospheric falling snow and whisper words that sound romantic in nature. Which would be brushed away as fantasy by your normal girl, but with Hong Ju being able to see the future this dream becomes more significant. A significance she is obviously not on board with since after sighting the man of her dreams (literally) moving in next door, Hong Ju does everything she can to avoid him.

HE IS SO PRETTY! Now that I have that out of my system, let’s get down to the nitty gritty personality traits of our hero. First off it has to be noted that Jae Chan can have his shallow moments. As a new prosecutor, we witness him constantly snapping selfies, Phhhht. He is also noted to not be the brightest person (although this personality trait is expressed by our bad guy, Lee Yu Beom, so who knows how much you can actually trust his opinion.)

Jae Chan is also very conscientious of those around him. We witness this trait when he hilariously forces Hong Ju to move down a bus stop bench in order to make room for a group of girls our leading lady had been ignoring. I personally think that a guy who is lacking in brains and only self-absorbed wouldn’t notice this situation. Let alone, go about fixing it for some unknown students.

I personally love the concept of the drama. Just like the Greek Princess Cassandra who foresaw the future but was cursed to not be believed by those she told, Hong Ju also does not have the ability to change the events she witnesses within her dreams.

The foretelling of the man’s death from the diner was very chilling (and a great way to start off a drama). Seeing the horrible fate of strangers is tragic.  Even worse, Hong Ju foresees her own mother’s death due to some type of accident that would happen in the future. In despair, Hong Ju cuts her hair short declaring that in the dream she had long hair. Which means if she keeps it short then there is no way the prophecy would come true 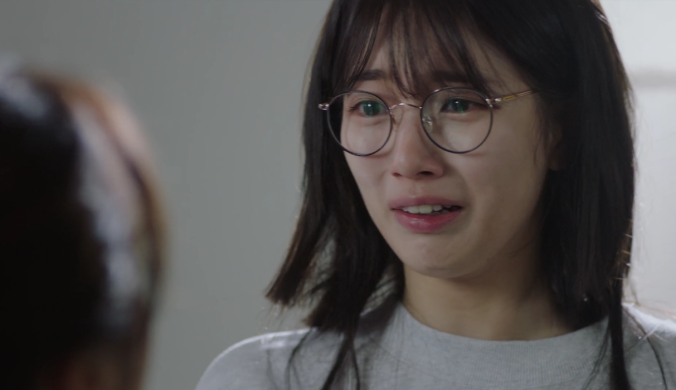 Despite Hong Ju’s attempt to change the future, things happen that are out of her control and she and her boyfriend (Yu Beom) are in a car accident. Due to the accident, Hong Ju ends up in a ten-month coma (during which her hair grows back to its previous length) and her mother dies from overwork in an attempt to pay for hospital and restitution bills.

Not only does she awake to find her beloved mother deceased, but she discovers that her boyfriend (Yu Beom, the most detestable significant other ever) has framed her for the accident. He literally moved her unconscious body into the driver’s seat and puts all the blame upon her. Realizing that no one believes her, including the prosecutor Jae Chan who is in charge of her case, Hong Ju heads to the roof where she jumps to her death……………………….What???? Enter the 2nd plot twist.

Not only is Hong Ju a psychic, but Jae Chan awakes on Valentines Day from a very vivid dream. A dream where his neighbor is involved in a horrible accident and commits suicide after waking from a coma. Yup. We have a double dose of psychic dreams. Which was a bit of a trip until I realized what was happening, but then I was totally on board with this plot twist.

Jae Chan spends his day in denial despite all of the events happening just as he had seen in his dream. Jae Chan even goes so far as to follow Hong Ju and Yu Beom on their romantic date. He just can’t seem to let that dream go. Especially once it starts snowing and he sees the couple get into Hong Ju’s car……with Yu Beom behind the driver’s wheel.

Events start to unfold just as it was dreamed by Jae Chan. Hong Ju and Yu Beom are in a conversation about supporting Hong Ju’s mother if anything tragic happens. Yu Beom is not paying attention when suddenly the car is hit. But instead of the innocent boy crossing the street, it is Jae Chan who just crashed his brand new car into them.

Jae Chan tries to explain that he was saving their lives and they would have killed someone, but Yu Beom is furious. He loudly screams that Jae Chan is jealous and trying to get back at him for a motorcycle accident from their youth (one in which Yu Beom laid all the blame on Jae Chan’s shoulders. He really is a total tool.) Hong Ju just stands near the car staring at Jae Chan as she realizes what just happened. Fate had been changed and her mother was saved thanks to Jae Chan. She slowly walks into his arms and thanks him for saving her.

The episode ends with Jae Chan and Hong Ju embracing as the snow falls all around them and blood dots their faces (strategically placed to highlight their pretty features.)

I personally am swooning at how beautiful this whole scene is and I think the director deserves a slow clap for its beauty.

I was worried because in the past Suzy has not always been my favorite leading lady. It isn’t as if I hate her, but I do realize that she has some pretty big acting limits. That said, I actually didn’t mind her in this. In fact, I thought that she really did a good job…….for her. I am sure that there are going to be those out there that don’t care for her portrayal of the leading lady, but I am not one of them and am happy with the level of emoting that she brought to the table. Was it spectacular? Not really, but for her, it was above par.

I love this writer’s ability to bring good villains to life. So far Yu Beom is doing a great job of making me hate him. I am looking forward to how he reacts to Hong Ju’s defection over to team Jae Chan. Judging from his total lack of ethics, this will turn into a great angsty battle.

As for Lee Jong Suk…. he is one of the main reasons I love this writer. His ability to create characters for LJS to portray is legendary. Does LJS ever really go out of his comfort zone? No, but I don’t really want to see him expand. I enjoy Lee Jong Suk’s dramas because they give me a certain happy buzz and I am content to have him keep the status quo. And so far, While You Were Sleeping is giving me exactly what I want.

As for the whole conflicting dream psychic future story arc…….I love it! I can’t wait to see how it all interweaves and whether their visions always conflict or fix each others. It is a huge web of ‘what ifs” that needs to be solved. Hopefully, we will be able to see the story give us some satisfying answers in the next few months.

Dramas With a Side of Kimchi

One thought on “While You Were Sleeping Episode 1 & 2”