Holy Batman, people. I think I need a moment. Or maybe a hundred to recover from that ending. This episode is all about reminding us of what Yeon Joo had and what she lost. In my drama watching career I’ve seen a lot of resets. Some due to amnesia, some to a tricky thing called time travel. They’re almost always painful because the world never seems to be kind about them. One person is left in the know. And if you know what was, but no one else does, it can make you not only sad but leaves you feeling extremely isolated. Thankfully, Yeon Joo has Soo Bong, but I’m not sure he’s enough to help her through this. And just like our tricky friend time travel, it appears that manhwa travel can be just as relentless.

Jennie B. is doing exactly what one does when they move right as school starts. Yup, she’s spending more time in the real world than she’d like so she’s bowed out of doing recaps for W and I will continue on.

KMUSE focused on the bad guy yesterday, and what a bad guy he has turned out to be. Today I want to focus on Yeon Joo, her dad, and Soo Bong. The writers of the little world they created called W.

We spend the first part of the episode seeing Yeon Joo slipping in and out of Kang Chul’s world. I’d say it really does give a new meaning to the phrase booty call. All Chul has to do is think of the one he loves and she appears.

Too bad he doesn’t remember her. The way they did these scenes broke my heart. Yeon Joo can’t move on with her life if she’s constantly finding herself face to face with Chul. But even worse than that is when he stops thinking about her all together.

She’s left to do one of the saddest walks down memory lane I’ve ever seen. She doesn’t have pictures with her manhwa husband so she goes to the local book store (who is stocking the fastest published book known to man. Hey, I work in the industry. I know how long it takes to get a book in print.) and buys all the W books she’s in. Then she cuts out and makes a collage of all of our OTP’s best moments. Rawr, can we go back and appreciate the handcuff kiss one more time.

Yeon Joo tells Soo Bong that it’s hard for her because no one in the manhwa world remembers her and no one but Soo Bong understands what she’s been through recently or what she’s lost.

And now we have Dad. Oh Dad, I really want to sympathize with you, but I’m having a hard time. 10 years of drinking and shoddy writing is coming back to haunt you. All your side characters had 1 purpose and started disappearing when Chul didn’t need them anymore. Your bad guy went rogue and had an identity crisis because you didn’t give him one. I know the bathroom scene in the plane was supposed to be scary but I was laughing so hard. Is the bad guy really going through all the same things Chul did except worse because he has no face?

This is Dad, and also Soo Bong’s, chance to prove they’re good writers. On the flash drive Chul gave Dad there are files from the W TV show. They are all on suspects for his parents’ murder. Dad needs to create a face for the killer and Chul will need to believe it or he might become self-aware again. So what does Dad do? He gives the killer the only face he thinks Chul will accept. His own. Which, don’t get me wrong, is actually very smart. But then instead of developing the killer’s character a little better he just kind of stops there.

Soo Bong and Dad have the rest of the story all scripted. Conveniently told to Yeon Soo so we can see it play out the way they’ve planned. Someone finds Dad’s image on a delivery truck black box that’s from the night of the stabbing. They splash it all over the news and voila they catch the killer.

The killer conveniently has all the evidence the police would ever need to convict him in his apartment. But Dad knows leaving the killer alive is too risky so he wants to kill him. He can’t use Kang Chul. We want a happy ending for our hero.

So he has the prosecutor that originally went after Chul for his families’ murder flip out and hire someone to kill the bad guy. He makes it look like a suicide. But Dad has the people he hires not be all that loyal and they give him up right away.

So bing-bang-boom. The Kang family killer is dead, and the pesky prosecutor is in jail.

And Chul is left to ride off into the sunset with… This is where Yeon Soo gets really sad. Soo Bong stumbles over himself a little but tells her that he’ll keep the ending vague but still have Chul and Soo Hee “together” at the end.

KMUSE and I both freaked out a bit when they show So Hee and Kang Chul give each other googly eyes. I know she’s supposed to be the heroine but I still just can’t see Chul with her. I’m totally on the BongHee ship. I’d love for So Hee to meet Soo Bong and have an awakening and decide to create her own purpose in life. They would be really cute together and she’d have some much needed fun. 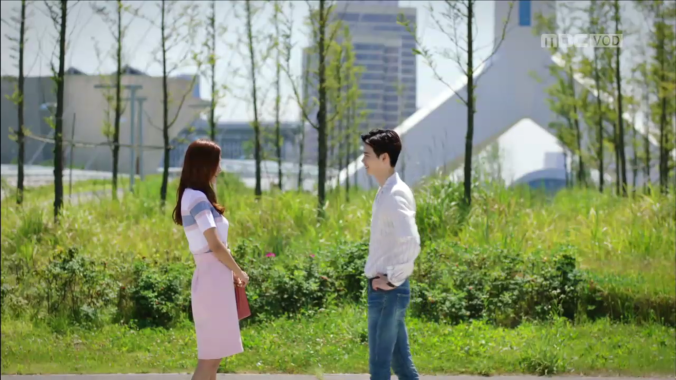 But I think Dad and Soo Bong forgot an important fact. Kang Chul is not the only one who was awakened before the reset. They not only have to dupe Chul into believing this guy is the killer. They have to make the killer believe what they’re writing for him feels real too. Or he’s going to go create his own story. That’s the thing. We’ve established that this isn’t a regular manhwa and whether it was Kang Chul’s will that changed it or something else, the fact is that there is a greater power allowing cartoon characters to cross into the real world and kill people. And not only kill people, but teleport and speak with written words in the air. Is anyone else questioning which world is real at this point? Or wondering if there is yet another writer god up there controlling both worlds? (The answer is yes there is, the drama writer. HA!)

After hearing the intended ending for W, alarms go off in Yeon Joo’s hospital and a loud speaker announces there are multiple gunshot victims in the ER, all hands on deck. Which is not a normal thing for a hospital in South Korea so Yeon Joo is properly freaked out.She dashes to the ER and as she goes, we see the hospital name on the wall is the one from the manhwa world. Yeon Joo doesn’t see that part so when she rushes past So Hee and Do Yoon she shocked to realize she’s back in the manhwa world.

She runs past a TV with the news blaring. There was a mass shooting at W studios. She’s instantly more concerned now because Kang Chul was among the people at the studio, and the news is saying everyone on the production staff was shot.

She runs into the ER which is full of injured people. Someone grabs her arm and she turns to find Kang Chul wanting her assistance in helping a patient who was shot in the leg. He only knows her as a doctor but you can see she’s just thankful he’s unharmed. She snaps out of her daze and helps the girl while Chul is pulled away.

We see that an hour ago, after they aired Killer Dad’s face, he busted into the broadcast room and opened fire. After shooting several people he’d turned to the camera and spoke directly to Chul. I really have to give the actor who plays Yeon Joo’s dad huge props. His different versions of the killer were awesome. And even though the faceless bad guy was scary. The actor managed to transform his features so much that he became chilling and seemingly unhinged. He’s almost cackling with glee to finally have a face after ten years of waiting.

And the most chilling part of this whole thing-our bad guy didn’t get that face by it being drawn into the manhwa. He stole it from Dad. I admit. I screamed bad words the moment Dad lifted his head. Holy fart bunnies. That is one messed up consequence to bad writing.

The below pictures are actual representations of how I looked when I saw that face.

Seriously, this show and the worlds it has created are becoming ever twistier. There are no rules to either world anymore. I mean, if a fake character can steal your face, there really isn’t much he can’t do. And what makes him any less real than you are. I’d almost argue that at this point, Dad is just as much a manhwa character as they are. And so is Yeon Joo. She’s “real” in both worlds.

Kang Chul needs to get his memories back, and stat, because he needs to know what he’s up against. In this reality and timeline, he thinks Killer Dad is a tangible person who abides by all the rules a normal world follows. But he’s not.

I’d say that Killer Dad is the one in control of the story at the moment. And Chul needs to take it back from him. And he needs Yeon Joo to do that. Yes, of course my broken OTP heart wants them back together for selfish reasons. More so though, I want them together, not with her being the kept Cinderella wife in his penthouse fortress, but as the other main character of their story. Because that is what it has become. He’s no longer the sole hero of this tale. And she has just as much at stake as he does. The killer wants both of them, and he already has a piece of her father.

Side note here that has nothing to do with the three characters we are focusing on. Mad Dog shows up ecstatic about the new turn of events which has put his favorite story back on track. The crappy love line has disappeared and the hero is set on catching the killer again. I will leave you with all the screenshots that pretty much show how I act when I’m talking to my husband about this show.

I’m not sure I have a theory anymore. This writer keeps throwing things at me, and I’m just running to catch up. What I will say is what I hope will happen. I want those closest to Chul to have their own identity crises and form Team W. Yeah, it sucks realizing some drunk dude created you, but they also have to figure out that their destiny is not fixed by him anymore and that they really can create their own story. They just have to step off the page. 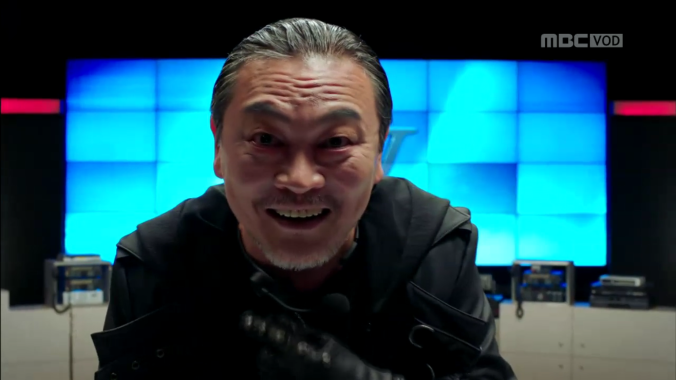